DETROIT (FOX 2) - The theme is D Up. In basketball that's defense on the court.  But for this new branding strategy, it's also about Detroit rising. That means supporting local businesses.

The vice president of brand and marketing for the Detroit Pistons figured out how to lay up a helping hand to local brands.

The theme is D Up. In basketball that's Defense on the court. But for this new branding strategy, it's also about Detroit rising. That means supporting local businesses.

"We really wanted to not only connect and tell the basketball story but to make sure that the city was reflected in doing so, and we landed on the campaign and said how can we take these layers from throughout the city and layer them into what we were doing?" said Tyrel Kirkham.

Detroit businesses that are hustling as hard as the players to make things in Detroit now featured in these Detroit Pistons ads.

Rebel Nell makes cufflinks and jewelry out of pieces of graffiti and other Detroit relics. So with the Pistons, they used pieces of jerseys to make one of a kind pieces.

"We had some jerseys that were leftover in our inventory and we decided to put Amy to the test and see what you could conjure up, and lo and behold she was able to produce some amazing cufflinks, jewelry, lockets, just a nice diverse mix of product that has a nice Detroit Pistons touch but also she's able to take what she's done in the city and put her flair on it and really create that local association," said Kirkham.

He is talking about Amy Peterson from Rebel Nell.

"To also preserve memories and the legacy through these pieces," Peterson said. "I think it is something that has been so special, each piece is so beautiful and one of a kind. Our team has certainly enjoyed making it." 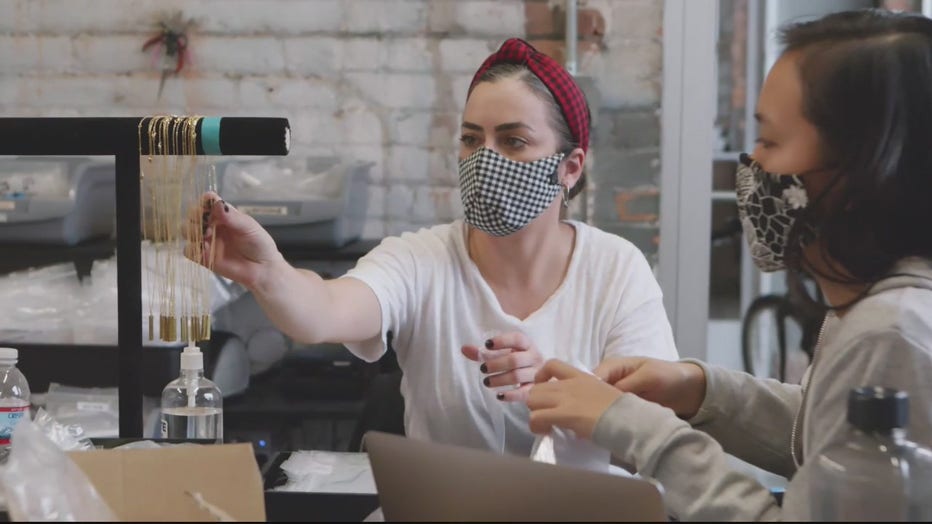 Then there's the York project.  Starting in 2013, Josh York's mission was to do good in Detroit.  So they started making donations to homeless shelters with every product sold.

"Over the past seven years that has grown to, we do monthly volunteer events in Midtown Detroit and we have donated over $100,000 worth of other items that we have been told by shelters and organizations serving the homeless," York said.

All of their products are made in Detroit. The Pistons contracted them to make gifts for Pistons employees, partners and VIPs.  Even though they could have bought their merchandise from anywhere to give out, they believe It's all about supporting local.

"We were able to come up with some awesome blankets as people cozy up this winter season, with the cold weather, you know you can cozy up with a product that was made locally, sourced locally, and again, having that nice authentic touchpoint with the city," Kirkham said.

"Being able to partner with the brand like the Pistons is incredible because that is a huge amount of people that follow and respect that brand, and to get to be associated with them is really incredible - and I could not have come at a better time for us," York said.

"It's a huge honor, just to be associated with the brand like the Pistons is something that small business like mine dream about," Peterson said. "So we are so grateful and we welcome all the views," said Peterson.

Watch all the videos on Pistons.com.