DETROIT (FOX 2) - Detroit Pistons, players, coaches and staff have been asked to self-quarantine after their recent game against the Utah Jazz after two of the team's players have tested positive for coronavirus.

The Pistons played the Jazz on Saturday, March 7 at Little Caesars Arena. The team is also confirmed to have stayed at the Westin Book Cadillac in Detroit afterward.

Now all of the Piston players are in self isolation.

"While there is no indication that the novel coronavirus was passed to any Pistons player or staff member, out of an abundance of caution medical staff has asked players, coaches, basketball staff and traveling party to self-isolate until further notice under the direction of team medical staff," the team said in a statement Thursday.

All organization employees have also been directed to work from home for the rest of the week.

Utah Jazz player Rudy Gobert is now the NBA's Patient Zero for coronavirus after becoming the first player in the league to test positive on Wednesday, March 11. The next day a second player was also confirmed to have the virus, Donavan Mitchell.

The NBA has since suspended its season "until further notice."

The Utah Health Department has said anyone who attended a Utah Jazz game recently is at low risk of developing symptoms from COVID-19.

"Only individuals who have had close contact with the player who is confirmed to have COVID-19 are considered to be at risk for potentially developing symptoms of COVID-19," the Utah Health Department said.

The Utah Health Department is recommending anyone who had contact with Gobert since Monday, March 9 to get tested. The Pistons game was on Saturday, March 7. 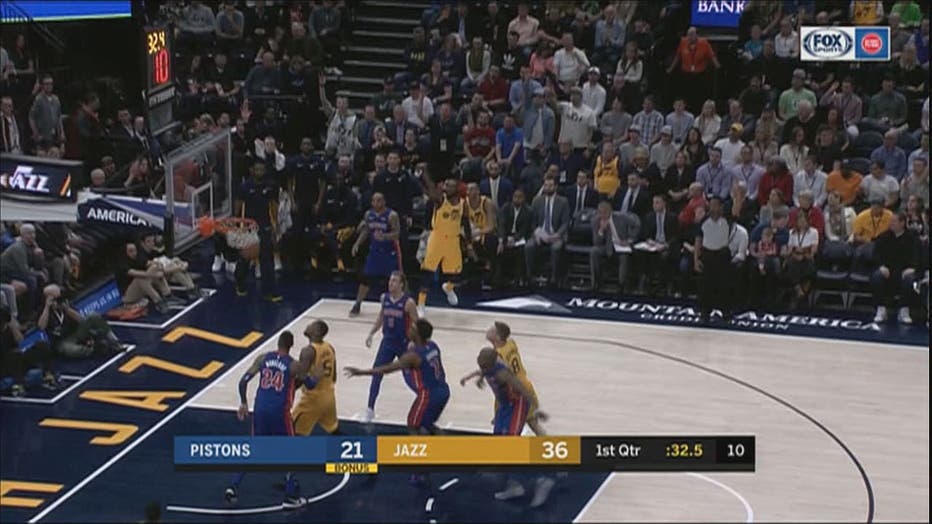 Just two days before testing positive for the virus, Gobert was also seen joking around and touching all of the microphones on a table during a media availability before the game with the Pistons.

Utah's game against Oklahoma City Wednesday night was canceled and the Pistons are among five teams that have played the Jazz -- and Gobert -- since the start of March, the others being Boston, Toronto, New York and Cleveland.

Gobert shared the court with 50 opposing players in those games, plus 15 referees.

The shutdown could cost teams well into the hundreds of millions of dollars depending on how long the shutdown lasts. Those teams that have faced Gobert in recent days will likely face some testing. And some of those Jazz reporters said they were getting tested for COVID-19, just in case.

"It's unprecedented," Detroit Pistons coach Dwane Casey said. "I think it's the prudent thing to do. And what went on in Utah, I don't know all the information but that just shows you how fragile everything is right now."