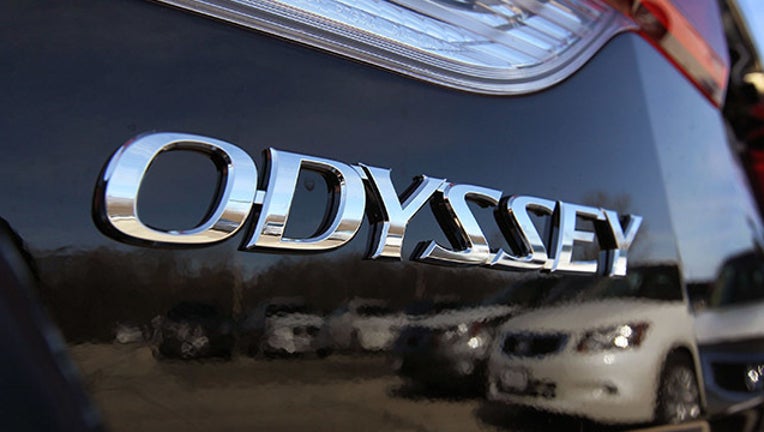 CINCINNATI (AP) - The father of a 16-year-old Ohio boy who died despite calling 911 while trapped in a minivan asked authorities Monday why responding officers didn't get out of their cruiser to search, and whether exact GPS coordinates existed for his son's location.

Appearing at a Cincinnati City Council meeting on the response to his son's death, Ron Plush promised to help improve the city 911 system but also said he would be asking difficult questions along the way.

Plush found the body of his son, Kyle Plush, on April 10 inside the 2004 Honda Odyssey in a parking lot near his school nearly six hours after Kyle's first 911 call. A coroner says he died of asphyxiation from his chest being compressed. It is suspected that the foldaway rear seat flipped over as he reached for tennis gear in the back.

"Kyle will give us the strength and guidance to get the job done," Ron Plush said.

"Tell my mom I love her": Teen trapped in van calls 911 before death

Mayor John Cranley told Plush he would receive written responses to every question and called the police report on the case incomplete.

Cranley opened Monday's meeting by saying the city failed in its response to the 911 call.

Cincinnati police chief Eliot Isaac presented the results of an internal investigation before the City Council's law and safety committee, providing details of the 911 call and the police response.

Among the information released Monday:

-The city's computer assisted-dispatching system experienced difficulties throughout the call.

-Kyle's phone was in his pocket as he called, and he was using "Siri" caller technology to call 911. Kyle was not able to give back and forth answers to a dispatcher, and the phone disconnected his call.

-The automated 911 response overrode Kyle's initial comments, which weren't heard by the dispatcher.

-Officers initially believed they were searching for an elderly woman locked in her vehicle needing help.

-Officers weren't given information from the initial call 911 that someone was banging and screaming for help.

Isaac said officers determined they could search a bigger area and see more by staying in their cruiser.

The boy's aunt, also attending Monday's meeting, noted that Kyle Plush's voicemail included his name, and was not a generic message.

If authorities knew the name "Kyle" and that the call was from someone near a school, they had enough to do a proper search minutes after the call was received, said Jodi Schwind.

Council members also questioned why officers didn't just search all the vans in the parking lot that day.

"Kyle did everything he should have done, everything a mom, a dad, would tell their child to do, he did," said councilwoman Amy Murray. "And he was failed horribly."

The Hamilton County sheriff's office, which also dispatched a deputy that day, is also investigating, as is the county Prosecutor's Office.

Council members scheduled a meeting May 29 for police to provide answer to questions raised Monday.