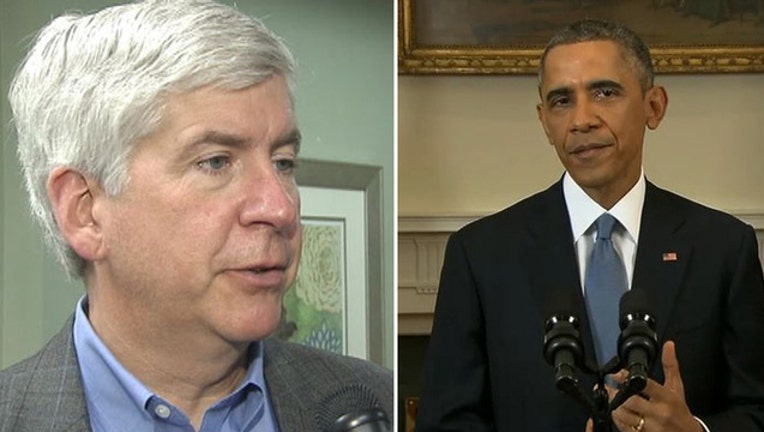 (WJBK) - If Gov. Rick Snyder and President Barack Obama were on the ballot today seeking re-election, how would they do? The answer is a mixed bag for both.

Lots has happened since Michigan voters selected both of these gentlemen for another four years, and that is reflected in the latest EPIC-MRA polling data which reveals some strong contrasts between the two.

The governor and the president have similar numbers on the favorability scale, but 48 percent have an unfavorable view of Mr. Obama while 40 percent feel the same way about the governor.

Then there’s the battle of the sexes.

Fifty percent of the women have a favorable opinion of the president but the governor gets 36 percent from them. Men, on the other hand, don’t much like the president, 41 percent, but 55 percent like the nerd.

A key element in the Obama coalition is young people and they by a 56 percent-41 percent margin are hanging in there with the president, while seniors are divided right down the middle.

Mr. Snyder does well with younger voters 18-34 and 48 percent of the seniors are on his side.

The real divide emerges on income, independent voters and labor.

No shocker here - 59 percent of labor households can’t stand the governor while 57 percent stand by the president.

Those earning under $25,000 a year reject the governor while 52 percent back the president. But once the salaries go north of $100,000, it’s the millionaire governor garnering a whopping 63 percent support while 46 percent of the rich like Mr. Obama.

Elections often turn on the independent voters. Here the president is in trouble with only 36 percent support among them while Mr. Snyder is 11 points better.

Geographically speaking the governor is stronger as he enjoys over 50 percent backing on the west side of the state, central Michigan and the donut around Metro-Detroit. The president gets over 50 percent in one region, Wayne, Oakland and Macomb Counties.

Since neither can run for another term, they can look at these numbers and not lose any sleep over them.