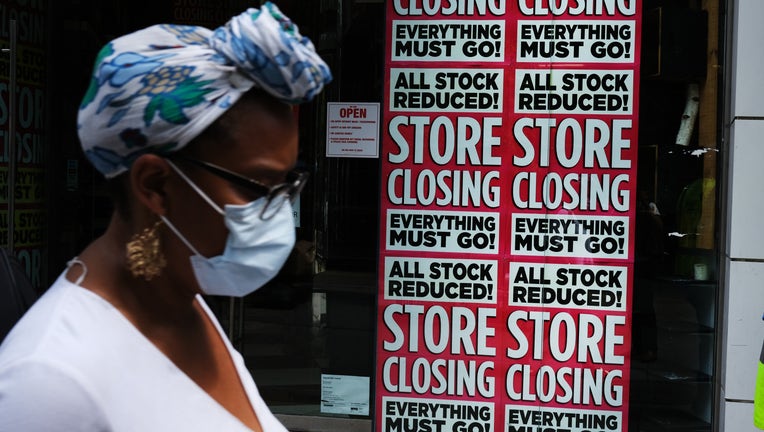 FILE - A store advertises a sale on July 07, 2020 in the Brooklyn borough of New York City.

WASHINGTON (AP) - Nearly half of Americans whose families experienced a layoff during the coronavirus pandemic now believe those jobs are lost forever, a new poll shows, a sign of increasing pessimism that would translate into roughly 10 million workers needing to find a new employer, if not a new occupation.

It's a sharp change after initial optimism the jobs would return, as temporary cutbacks give way to shuttered businesses, bankruptcies and lasting payroll cuts. In April, 78% of those in households with a job loss thought they'd be temporary. Now, 47% think that lost job is definitely or probably not coming back, according to the latest poll from The Associated Press-NORC Center for Public Affairs Research.

The poll is the latest sign the solid hiring of May and June, as some states lifted stay-at-home orders and the economy began to recover, may wane as the year goes on. Adding to the challenge: Many students will begin the school year online, making it harder for parents to take jobs outside their homes.

“Honestly, at this point, there’s not going to be a job to go back to,” said Tonica Daley, 35, who lives in Riverside, California, and has four children ranging from 3 to 18 years old. “The kids are going to do virtual school, and there is no day care.”

Daley was furloughed from her job as a manager at J.C. Penney, which has filed for bankruptcy protection. The extra $600 a week in jobless benefits Congress provided as part of the federal government's coronavirus relief efforts let her family pay down its credit cards, she said, but the potential expiration or reduction of those benefits in August would force her to borrow money to get by.

Adjusting your budget and minimizing credit card debt are essential.

The economy's recovery has shown signs of stalling amid a resurgence of the coronavirus. The number of laid-off workers seeking jobless benefits rose last week for the first time since March, while the number of U.S. infections shot past 4 million — with many more cases undetected.

The poll shows that 72% of Americans would rather have restrictions in place in their communities to stop the spread of COVID-19 than remove them in an effort to help the economy. Just 27% want to prioritize the economy over efforts to stop the outbreak.

“The only real end to this pandemic problem is the successful application of vaccines,” said Fred Folkman, 82, a business professor from Long Island, in New York.

About 9 in 10 Democrats prioritize stopping the virus, while Republicans are more evenly divided — 46% focus on stopping the spread, while 53% say the economy is the bigger priority.

President Donald Trump and Congress have yet to agree to a new aid package. Democrats, who control the House, have championed an additional $3 trillion in help, including money for state and local governments. Republicans, who control the Senate, have proposed $1 trillion, decreasing the size of the expanded unemployment benefits.

Overall, about half of Americans say they or someone in their household has lost some kind of income over the course of the pandemic. That includes 27% who say someone has been laid off, 33% been scheduled for fewer hours, 24% taken unpaid time off and 29% had wages or salaries reduced.

Eighteen percent of those who lost a household job now say it has come back, while another 34% still expect it to return.

Trump’s approval rating on handling the economy stands at 48%, consistent with where it stood a month ago but down from January and March, when 56% said they approved. Still, the economy remains Trump’s strongest issue. Working to Trump’s advantage, 88% of Republicans — including 85% of those whose households have lost income during the pandemic — approve of his handling of the economy. Eighty-two percent of Democrats disapprove.

“A lot of people criticize our president, but he’s a cheerleader," said Jim Russ, 74, a retired state worker from Austin, Texas. "As long we keep that, the American public will think positive and look positive.”

The poll finds that 38% of Americans think the national economy is good. That’s about the same as in June and up from 29% in May but far below the 67% who felt that way in January.

Sixty-four percent of Republicans think the economy is good, compared with 19% of Democrats. Likewise, 59% of Republicans expect the economy to improve in the next year, while Democrats are more likely to expect it to worsen than improve, 47% to 29%.

Sixty-five percent of Americans also call their personal financial situation good. That’s about the same as it’s been throughout the pandemic and before the crisis began. Still, Americans are slightly less likely than they were a month ago to expect their personal financial situation to improve in the next year. Thirty-three percent say that now, after 38% said so a month ago. Another 16% expect their finances to worsen, while 51% expect no changes.

So much of what happens in the economy will depend on the trajectory of the virus, said Danny Vaughn, 72, from Dade City, Florida.

“I don’t disagree with everything the president does, but his leadership on the coronavirus issue has been lacking,” Vaughn said. “And that’s the number one issue facing the American people right now.”