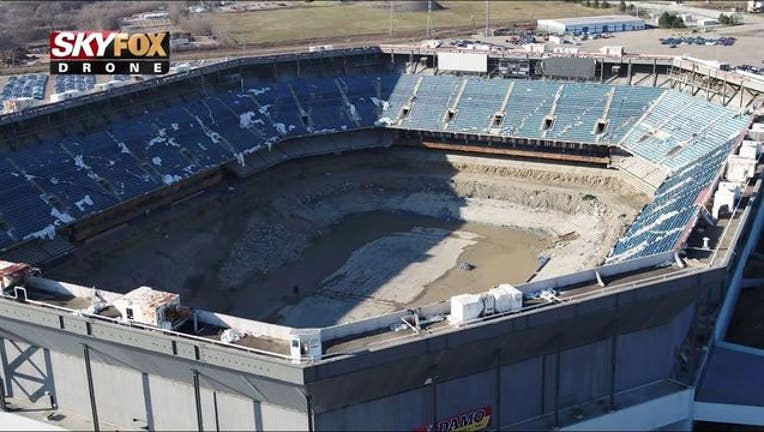 DETROIT (WJBK) - Sunday is the end of era in Metro Detroit as the Silverdome demolition gets underway.

A partial implosion of the Silverdome will happen Sunday morning in Pontiac after the city and owners reached a deal to begin the tear down of the former home of the Lions.

Crews will partially implode the mechanical equipment platform at the top of the 400,000 square foot building.

FOX 2 will have the SkyFOX Drone Team on the scene to capture exclusive video, we'll also have the SkyFOX helicopter in the air, and a ground crew. We'll stream it on FOX 2 News now on our Facebook page.

The first the blast will break the metal beams supporting the upper ring of the dome, which is a 20-foot steel band that held up the equipment used to inflate the roof. Then, each vertical beam surrounding the Silverdome will be broken when a small charge detonates, causing the steel ring to fall to the ground.

Crews will use hydraulic excavators to take care of the rest of the structure in sections.

A total of 1,800 tons of rebar and 1,700 tons of structural steel will be recycled at the city's Ferrous Processing plant.

The process is expected to take about a year to complete.

The weather for Sunday is looking favorable for demoltion, but if it has to be rescheduled it will be pushed back one week.

The Silverdome property sits on 127 acres and was last used as home of the Detroit Lions in 2001. It once hosted the Super Bowl, the Pistons, WrestleMania III, the World Cup and Pope John Paul II's visit.