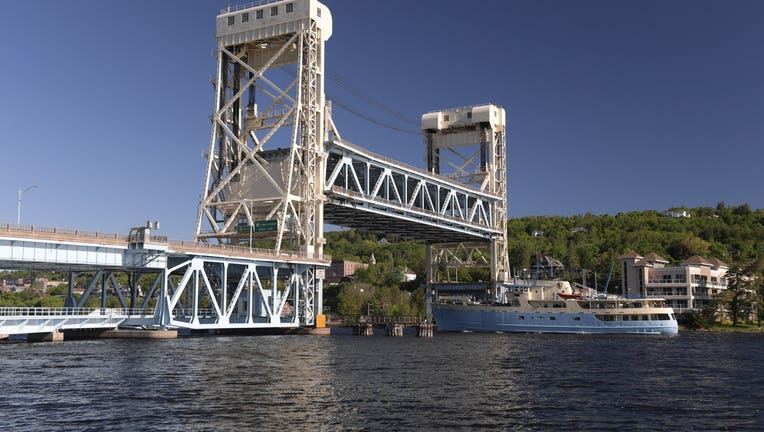 Two Michigan Technological University students and a professor pushed for the recognition for the bridge, which connects Houghton, where the college is, and Hancock.

The bridge was named a State Historic Landmark in summer 2019 and recognized by ASCE on the national level later that year, but the dedication planned for summer 2020 was delayed due to Covid. The dedicated happened June 17 of this year.

"It's really a big, big achievement for not just the community but for MDOT and the state of Michigan as a whole," said State Transportation Director Paul C. Ajegba. "This bridge was built in 1959 - no computers, all the calculations were done by hand - the heaviest lift bridge in the world at the time."

Crews worked through harsh Upper Peninsula winters to build the bridge, which needed to be able to accommodate vehicle, rail, and water traffic. At the time, the bridge had the heaviest lift span in the world at 4,584,000 pounds and spanning 260 feet.

Its original purpose was to provide a connection between the Keweenaw Peninsula and the mainland. According to the Department of Transportation, it was a crucial link for moving billions of pounds of copper mined from the peninsula to the rest of the United States.

"I would like to just thank MDOT for maintaining the bridge and for keeping in good performance," said Tom D’Arcy, one of the original designer engineers of the bridge. "I'm so happy to see the local community appreciate the bridge and appreciate my work."

Tess Ahlborn, who is a professor of civil, environmental, and geospatial engineering, and former students Michael Prast and Emma Beachy, who both graduated in 2019, nominated the bridge and did the research, interviews, and documentation needed.

More than 25,000 vehicles cross the bridge each day, and it is the only land crossing over the Portage Canal.

"It's a local landmark, right? It's part of the culture here, and it had a really big impact in terms of the movement of mining goods when it was first built and then the movement of people and goods between the towns of Houghton and Hancock," Beachy said. "From a civil engineering perspective, it's a double deck vertical lift bridge, which is really unusual. It has this really unique way that it uses its lift span, so it has this intermediate position that lets it be open to a lot of marine traffic at the same time that it's open to a lot of vehicle traffic. And so, it's a really efficient way to use this really unique kind of bridge."