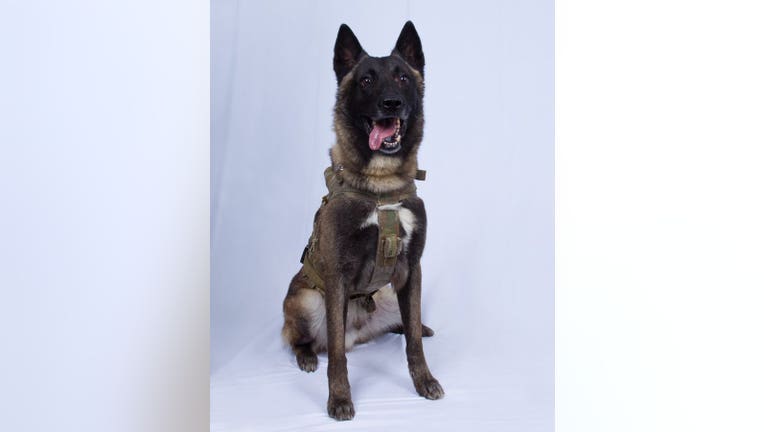 President Trump tweeted this photo of the K9 reportedly injured during a mission to kill a leader of ISIS. (@realDonaldTrump)

President Donald Trump tweeted a photo of the K9 reportedly injured during a mission to kill a leader within the terrorist organization ISIS.

"We have declassified a picture of the wonderful dog (name not declassified) that did such a GREAT JOB in capturing and killing the Leader of ISIS, Abu Bakr al-Baghdadi!" the president's tweet read.

The extent of the dog's injuries was not known.

Trump said al-Baghdadi died while being chased down by U.S. forces in a tunnel, and that the ISIS leader was “whimpering and crying and screaming all the way,” before detonating a suicide vest, killing himself and three children who were with him.

“No personnel were lost in the operation, while a large number of Baghdadi’s fighters and companions were killed with him,” Trump said, adding that the U.S. recovered “highly sensitive” materials related to ISIS. “You are the very best anywhere in the world,” Trump later said of the U.S. forces.

This story was reported from Tampa, Florida. Fox News contributed to this report.