WASHTENAW COUNTY, Mich. (FOX 2) - Dozens protested Wednesday outside the Washtenaw County Sheriff's office after a video surfaced showing a white male deputy repeatedly punch a black woman before tackling her to the ground.

The woman's husband, who was tased and arrested himself during the incident, was among those protesting for the deputy involved to be fired and charged criminally.

A group of protesters gathered outside the Washtenaw County Sheriff's Office Wednesday after a video surfaced showing a white male deputy repeatedly punch a black woman before tackling her to the ground.

"I'm not gonna just let somebody just sit there and beat on my wife," Damoyal Karhi Grady El said. "They knew that what they did was wrong. Somebody's going to have to be held accountable for it."

The sheriffs' office says this happened early Tuesday morning when deputies had been responding to a shooting on Peachcrest in Ypsilanti. Apparently a 34-year-old woman had been shot at a house party.

Daniyal Karhi Grady El said police were looking for a suspect and trying to enter his daughter's home without a warrant, so he and his wife started recording them.

"We're just trying to video tape to make sure everything's on the up and up," he said. Grady El said one of the deputies eventually came from behind and tackled his wife to the ground.

"One of their officers just started beating on my wife. Just hitting her, just hitting her. On her back, on her head, just beating her."

He said he tried to intervene but was then tased. Both of them were arrested.

The Washtenaw County Sheriff's Office released Grady El and his wife, who has a history with police. His wife is now being held in Taylor on a separate warrant.

Grady El said she sued Taylor police for harassment before and was roughed up by Canton police last year.

"It just hurts to see that she has to go through this again. When she hurts I hurt and I can feel my mom's pain right now," said Jaquisy Diggins, the couple's daughter.

The Washtenaw County Sheriff says a use of force investigation has now begun and some staff involved have been placed on administrative leave. But protesters say that's not good enough. 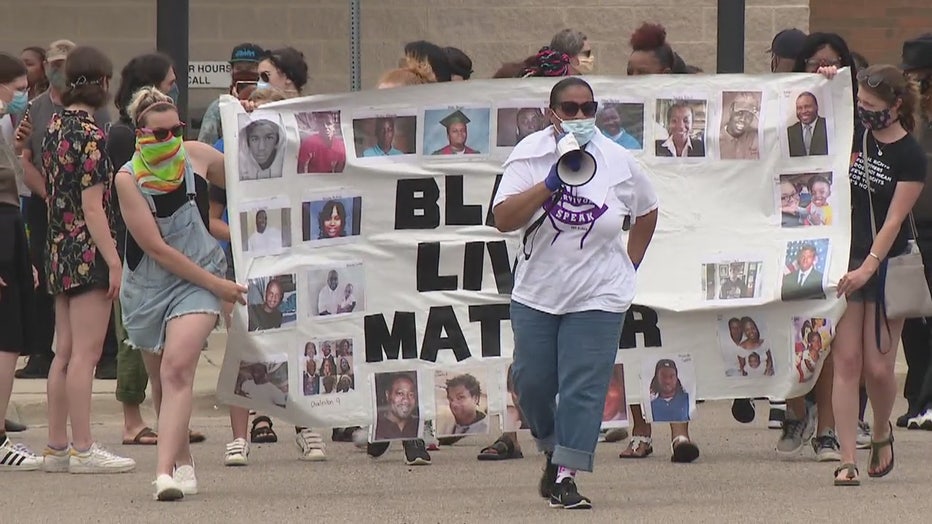 "Nothing justifies a man of that stature hitting a woman repeatedly in the head," said protester Eli Savit.

"If the Washtenaw County Prosecutor's Office charges these people there's gonna be hell to pay," said attorney William Amadeo, about the husband and wife.