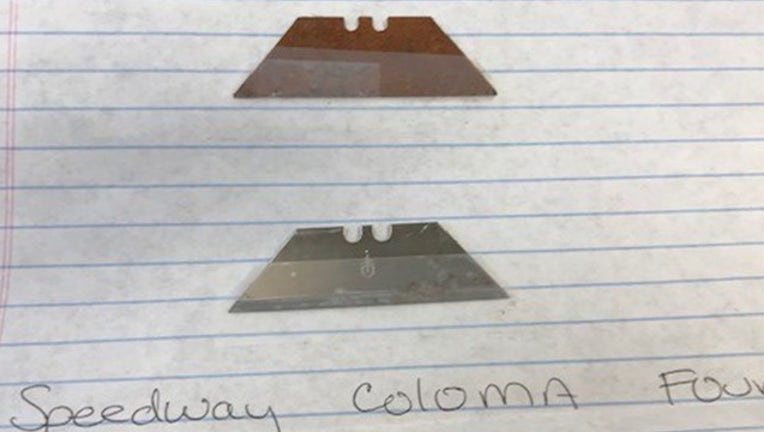 Police in one west Michigan township are urging people to be vigilant after a razor blade fell from a gas pump after a patron picked it up.

The warning, posted on Facebook Tuesday morning, was published following reports of two razor blades being found on gas pumps.

Originally found by a woman at a Speedway Gas Station on Monday in Coloma Charter Township, she posted the incident on Facebook, which was eventually shared to the police department.

"It's a rare thing to happen around here," said Wes Smigielski, police chief of Coloma Township. "We do have I-94 that runs through our city. We're not huge; not a ton of crime."

Police were unable to identify a suspect and said there was no helpful evidence during a review of video at the gas station due to vehicles blocking the footage. There were also no fingerprints on the blades. While police can't confirm a motive, they're confident it wasn't for good reasons.

"We can't say for sure, but it probably wasn't placed there for niceness," said Smigielski.

Along with the two razor blades, another six were found on top of the gas pump.

Because of the lack of evidence, the police department's Facebook post served as a public service announcement to be careful around gas stations.

"Please be vigilant and inspect handles prior to use," read the post.

Coloma Township is a few miles north of St. Joseph and about 41 miles from Kalamazoo. It has a population of about 6,500 people, although that number balloons in the summer when tourists travel in to the city.