FOX 2 - When you take your car to a body shop for repairs you expect it to come back with less damage - not more damage.

That's one of the reasons why a Redford repair shop guy is on a collision course with Rob Wolchek. He's a smooth operator, but he has a few dents in his reputation and those dents aren't going to get bumped out any time soon.

When you take your car to a body shop for repairs you expect it to come back with less damage - not more damage. That's one of the reasons why a Redford repair shop guy is on a collision course with Rob Wolchek.

"Thank you for free publicity."

Oh yeah, Wolchek and some of his customers are going to give Kevin some great PR..

"My car is falling apart basically," said Andre. "He saw me taking pictures and he said some words that were very threatening."

This is Nicole and this is Nicole's daughter posing with the SUV mom bought her in 2018 to commute to college.

This is the crash in 2019 on Telegraph Road in Redford. Luckily, Nicole's daughter wasn't hurt, but the Ford Escape didn't escape being smashed up.

"At the time that the police and ambulance were there, he pulled up, Kevin Johnson," said Nicole.

What luck!  The crash occurred right in front of Orchard Restoration, Kevin Johnson's body shop. Nicole gave Kevin Johnson $2,000 to fix the car before school started in a week.

But by October, the Escape sat in Kevin's lot and for some reason, it looked like pieces were being taken out of the engine.

In November, the hood was taken off, the same hood that hadn't even been damaged in the crash.

In January, Nicole took these photos of the little SUV inside Orchard Restoration looking dismantled.

"Every time I went there, something was (taken) off of it," she said. 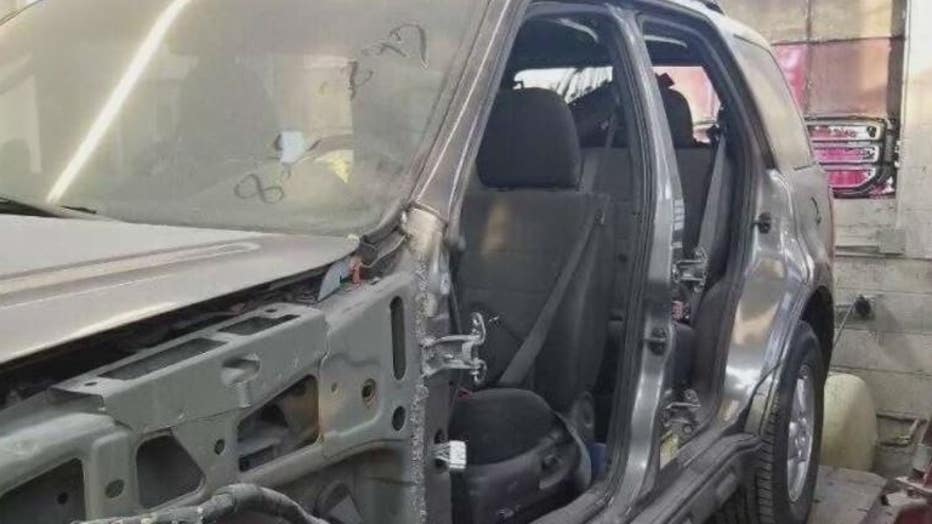 Nicole filed a police report and sued Kevin. She was awarded a $6,100 judgment. But Kevin closed up the shop and hasn't paid her a dime.

Well, you know Wolchek is going to find him - and he's not even far away.

Nyambi had a 2016 Ford Fusion that was rear-ended. She had the car towed to Orchard Restoration. She handed Kevin a $4,000 cashier's check.  Kevin said it would take two weeks.

Nyambi says Kevin hid behind the gate and would never let her even see her vehicle - but Nyambi was fed up.

"I kind of barged my way in, and when I saw my car, the front end was smashed," she said.

"So he said the tow truck company had damaged the car," Nyambi said.

But it just so happened the tow company had a policy of taking photos after dropping vehicles off - and as you can see, the front end of Nyambi's car was just fine.

Nyambi had the Redford Police Department tow her car to another body shop, sued Kevin Johnson and won - but hasn't been paid squat.  Plus, she reported him to the Michigan Secretary of State Business Licensing Section. 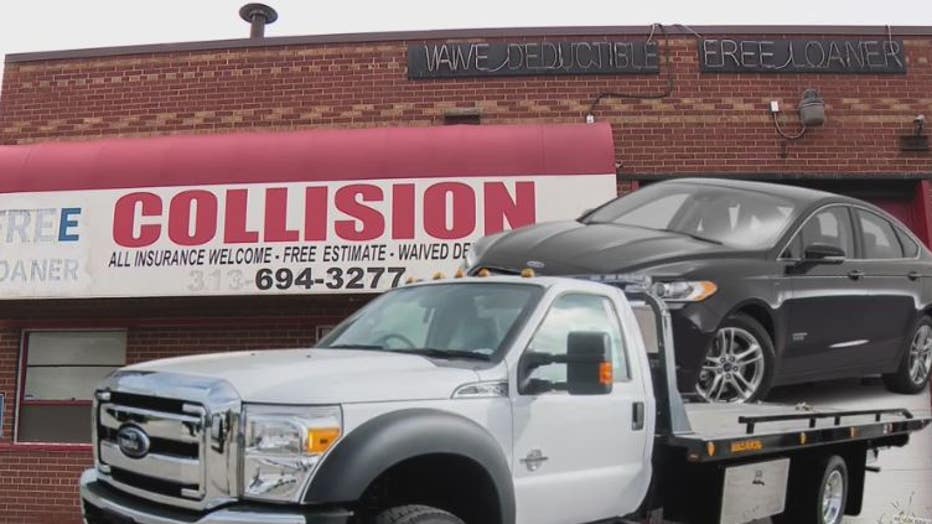 "The state of Michigan contacted me back and said he doesn't even have a license to fix cars," she said.

"He had my car for probably five months," said Andre.

Andre's known Kevin since high school and thought he was a friend - until Kevin started doing collision work on his Jeep.

The Jeep's doors now open with a grunt and Andre groans every time he thinks about how Kevin Johnson ruined his vehicle.

Andre, Nyambi and Nicole, didn't know where Kevin was. His shop was closed and his phone was dead. 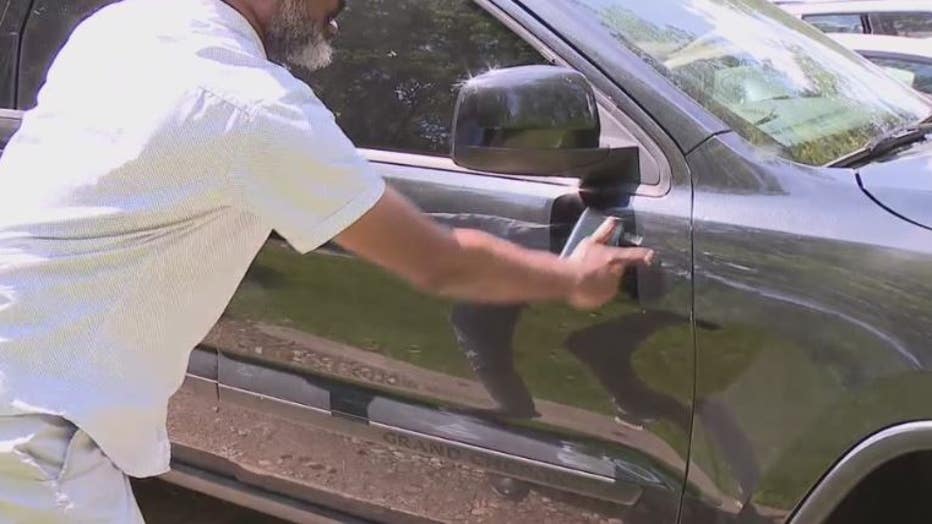 Andre and his Jeep.

But Wolchek got a tip about a secret body shop just down the road. There's no name on the place, but there he is, Kevin Johnson. He popped into the junkyard of cars in front of the fence once in a while but spent most of his time behind the gate where nobody could see him.

When he did go out, he drove to a sandwich shop, a used car dealership, a liquor store, he always parked close to the door.

He took different vehicles off his lot to run his errands, which his customers probably wouldn't appreciate - especially since Kevin Johnson doesn't have a valid driver's license.

There he was parking in a fire lane right by the front door at Home Depot. He's probably going to load a pallet full of stuff in the back right?  Nope. A half-hour later he's out with the little bag.  Oh well, if the truck got a ticket or was towed, it's not his vehicle.

And breaking rules is kind of Kevin's thing, so is breaking laws. The guy is a habitual offender. according to the Michigan State Police. 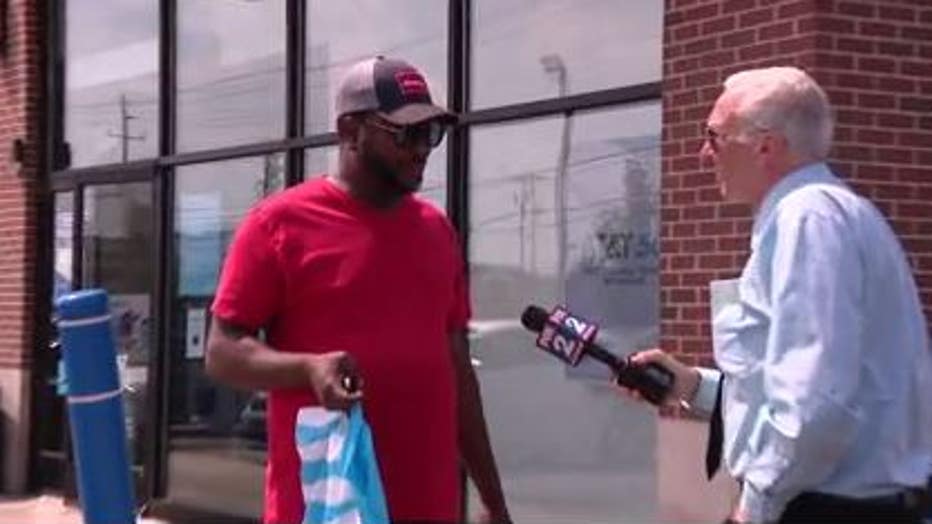 And today, he's driving one of his customer's Cadillacs to the phone store. Time for Wolchek to put a dent in the collision guy's day.

Wolchek: "Can I ask you about your body shop?"

Okay, Rob plays along - for now.

Wolchek: "I've got to ask you about some customers of your Orchard Restoration Shop. Nyambi, you remember her?"

Kevin: "No. Because I fixed everything I could on her car."

Wolchek: "What about Nicole. You remember Nicole, I got a judgment for her ..."

Wolchek: "Well hang on. Talk to me for a minute."

Kevin takes off, but a half-hour later we meet again when Kevin comes after me across the street from the mystery body shop we've seen him at for weeks.

Wolchek: "So what's this business over here?"

Wolchek: "Whose car is this car anyway?  You don't even have a driver's license, Kevin."

Wolchek: "You got your driver's license suspended. Isn't it?"

Kevin: "Thank you for free publicity."

"You're welcome, Kevin. Welcome into the Hhhhhhall of Shame!"

Kevin Johnson doesn't have a licensed repair facility in his name, but his wife does: It's called Toyco, and according to the Secretary of State, it's on probation.

If you have a complaint about a repair shop, the Secretary of State has a complaint kit HERE.