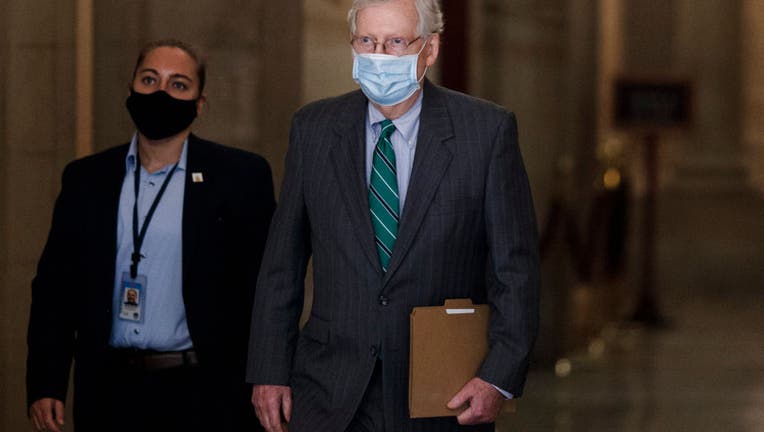 The Senate prepared to vote this week on a trimmed-down Republican coronavirus relief package, though it only has a slim chance of passage in the face of Democrats' insistence for more sweeping aid.

Senate Majority Leader Mitch McConnell released the approximately $500 billion measure on Tuesday as senators returned to Washington for an abbreviated pre-election session, but hopes were dimming for another coronavirus relief bill — or much else.

Republicans struggling to retain their Senate majority this fall have been divided, with some GOP senators in close races anxious to respond further to the pandemic, even as conservatives are tiring of all the spending and passing legislation in concert with liberal House Speaker Nancy Pelosi.

McConnell called the package “a targeted proposal that focuses on several of the most urgent aspects of this crisis, the issues where bipartisanship should be especially possible." They included school aid, new money for vaccines and testing, and a second round of the popular Paycheck Protection Program for smaller businesses.

Even if the aid were restored, it will likely be less than its previous amount.

Democrats demanded a far larger bill, including hundreds of billions of dollars for state and local governments, more generous jobless benefits, and help for renters and homeowners, along with other provisions in the House Democrats' $3.5 trillion relief bill that passed in May.

“Get real, Mitch McConnell,” Pelosi said during a Bloomberg interview. “It’s only a ‘check the box’ so that some of his endangered Republican senators can go home and say, ‘Well, see, I tried.’ But it isn’t trying. It is not even an attempt to do the right thing.”

Republican senators such as Susan Collins of Maine are eager to show constituents they are continuing to work to ease the pandemic’s disastrous impact on jobs, businesses and health. But many Senate Republicans are resisting more spending, and the scaled-back bill is roughly half the size of a measure McConnell unveiled earlier this summer.

McConnell's move Tuesday would clear the way for a Thursday test vote in which Democrats were sure to block the legislation. Pelosi and Senate Minority Leader Chuck Schumer, D-N.Y., said in a statement that the bill “doesn’t come close to addressing the problems and is headed nowhere."

RELATED: Trump says Americans can expect another round of coronavirus stimulus payments

McConnell's bill would provide $105 billion to help schools reopen, enact a shield against lawsuits for businesses and others that are powering ahead to reopen, create a scaled-back $300-per-week supplemental jobless benefit, and write off $10 billion in earlier debt at the U.S. Postal Service. There's $31 billion for a coronavirus vaccine, $16 billion for virus testing and $15 billion to help child care providers reopen. There is additionally $20 billion for farmers.

The package will also include a school choice initiative sought by Texas GOP Sen. Ted Cruz and others that would provide a tax break, for two years, for people who donate to nonprofit organizations offering private school scholarships.

It would also provide for a $258 billion second round of paycheck protection subsidies.

But it won't contain another round of $1,200 direct payments going out under President Donald Trump's name and the new $300 weekly jobless benefit would expire just after Christmas, on Dec. 27. The GOP bill also lacks funding for election security that lawmakers from both parties have supported.

At least one Republican, Sen. Rand Paul of Kentucky, said Tuesday he would oppose the bill, refusing new spending that piles on debt. It’s a sign of the troubles McConnell has faced in crafting a bill his own party would support.

Pelosi, D-Calif., continues to demand a package totaling $2.2 trillion, and while Trump's negotiators have signaled a willingness to inch further in her direction, a significant gap remains.

RELATED: Study: 19% of COVID-19 cases nationwide from last month can be traced back to Sturgis Motorcycle Rally

Talks between top Democrats and the Trump administration broke off last month and remain off track, with the bipartisan unity that drove almost $3 trillion in COVID-19 rescue legislation into law this spring replaced by toxic partisanship and a return to Washington dysfunction.

Expectations in July and August that a fifth bipartisan pandemic response bill would eventually be birthed despite increased obstacles has been replaced by genuine pessimism. Recent COVID-related conversations among key players have led to nothing.

Democrats seem secure in their political position, with Trump and several Senate GOP incumbents lagging in the polls. Trump is seeking to sideline the pandemic as a campaign issue, and Republicans aren't interested in a deal on Democratic terms — even as needs like school aid enjoy widespread support.

Poisonous relationships among key leaders like Pelosi and White House chief of staff Mark Meadows give little reason for confidence about overcoming obstacles on the cost, scope and details of a potential relief bill. Pelosi recently referred to Meadows as “whatever his name is," while the Meadows-run White House during a press briefing ran a video loop of Pelosi's controversial visit to a San Francisco hair salon.

The relationship between Pelosi and her preferred negotiating partner, Treasury Secretary Steven Mnuchin, is civil but isn't generating much in the way of results, other than a promise to avoid a government shutdown at the end of the month by keeping a government-wide temporary spending bill free of controversy. That measure is likely to keep the government running into December. It's likely to contain a bunch of lower-profile steps, such as an extension of the federal flood insurance program and a temporary reauthorization of spending from the highway trust fund.

But if talks continue to falter, there's little to keep lawmakers in Washington long, particularly with the election fast approaching.

RELATED: Even as hiring slows, American unemployment rate falls to 8.4%

One Republican in leadership, Sen. Roy Blunt of Missouri, said he was “disappointed” they had not reached agreement sooner. “On all of this money, the longer we wait the less effective it is, whether it’s money for elections — which particularly have one day that’s the target — or money for back to school,” said Blunt.

The Senate returned Tuesday to resume its diet of judicial and administration nominations. The House doesn't come back until Sept. 14 for a schedule laden with lower-profile measures such as clean-energy legislation and a bill to decriminalize marijuana. Some Democrats are expected to continue to take advantage of remote voting and may not return to Washington at all.

This story has been corrected to show the May virus legislation total was $3.5 trillion, not billion.