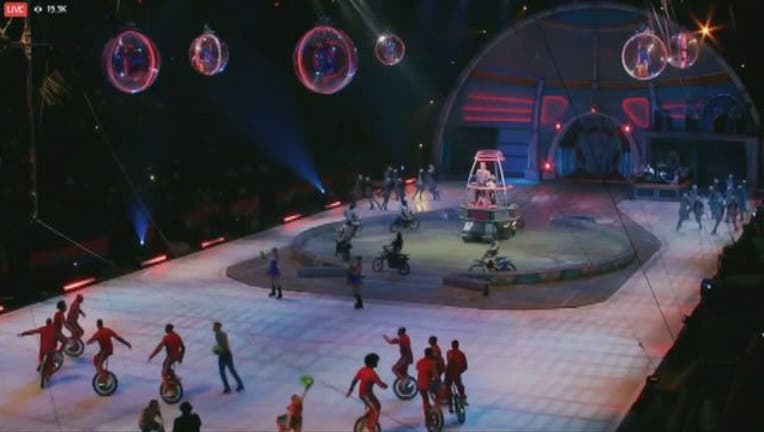 UNIONDALE, N.Y. (AP) - With laughter, hugs and tears -- and the requisite death-defying stunts -- the Ringling Bros. and Barnum & Bailey Circus received its final standing ovation Sunday night as it performed its last show.

"We are, forevermore, the Greatest Show on Earth," boomed Johnathan Lee Iverson, who has been the ringmaster since 1999. His son, who also performed, stood by his side. The show was held at the Nassau County Coliseum in Uniondale, New York, about 30 miles (48 kilometers) east of New York City.

It was an emotional 2 1/2 hours for those who worked on the circus. Many of Ringling's employees are second, third and even fourth-generation circus performers, while others met their spouses while touring. All spent months on the road, traveling from city to city in Ringling's train cars and describing themselves as a giant family, albeit one with many clowns.

But it also was the fans who felt like family.

Elaine Bario, a 57-year-old usher at the Nassau County Coliseum, said she's seen the circus every time it's been on Long Island -- some years as a child with her father, who also was an usher at the same venue.

"The animals, this is where we fell in love with them," she said. "We got to see animals here and the Bronx Zoo. We don't go on safaris."

Bario cried as she watched the final big cat act with its leopards, tigers and Alexander Lacey, the handsome animal trainer.

"I've always had a crush on the lion tamers," she said, laughing through tears.

But it was those animal shows that led to the circus' eventual demise.

Over the years, animal rights activists had targeted Ringling, saying that forcing animals to perform and transporting them around the country amounted to abuse. In May 2016, the company removed elephants from its shows, but ticket sales continued to decline. People, it seemed, didn't want to see a circus without elephants. Ringling's parent company, Feld Entertainment, announced in January it would close the show, citing declining attendance and high operating costs.

A handful of protesters stood outside the venue on Sunday, with signs that said "compassion always wins," and "the future is animal free."

Feld Entertainment CEO Kenneth Feld said that "we all have to embrace change."

Earlier Sunday, a group of retired and former circus performers sat across the street at a hotel bar, laughing and hugging and sharing memories of tours past.

Once a mainstay of entertainment in small towns and big cities across the country, Ringling had two touring circuses this season, one of which ended its run earlier this month in Providence, Rhode Island . That show was the more traditional, three-ring circus, while the one performing this weekend had a narrative storyline. Called "Out of This World," it was set in futuristic outer space.

In the end, though, Feld executives said they knew the circus couldn't compete with iPhones, the internet, video games and massively branded and carefully marketed characters. Their other productions -- Frozen on Ice, Marvel Live, Supercross, Monster Trucks, Disney on Ice -- resonate better with younger generations.

But that didn't stop the circus from giving the performance of their life, one last time, to one last crowd.