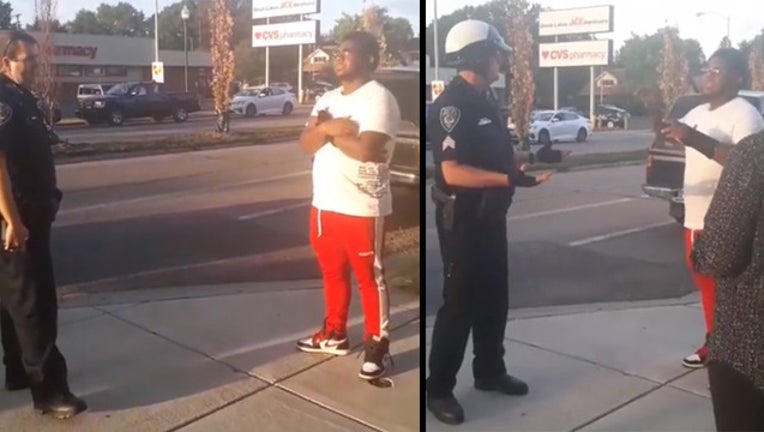 According to a Facebook live stream (embedded below) shot by Kimiko Adolph, Devin Myers was stopped by police as he was walking down 4th Street Tuesday evening because a woman called police on him for looking at her. Adolph and Myers both said in the video that she called because he 'looked suspiciously' at her.

Adolph tagged Myers but also said later in the video that she doesn't know him and isn't even from the area.

Myers has his arms crossed in front of his chest through most of the time that he's in the video. He's calm the entire time and even apologizes to the patrol officers who stopped him "for wasting your guys' time".

The video starts after the officers had stopped him but both Adolph and Myers reference a woman in a white car parked in front of the CVS across the street as being the woman who called the police. Both also say they're waiting for a police supervisor to arrive.

Supervisors arrived about 4 minutes into the video and Myers explains to them that they were called because he "looked suspicious".

Along with Adolph and Myers is the owner of the Inn Cafe who is advocating on Myers' behalf.

When the supervisor shows up, he asks the restaurant owner this question: "So if someone calls, we're not supposed to respond?"

Myers said it's evident that he's not a threat to her.

"You pull up and you see, I'm not a threat to her. I'm not even close to her," Myers said.

By the time the supervisor tells Myers he's free to leave, there are four Royal Oak Police officers on the scene.

"We came from 13 and Woodward for nonsense," the supervisor said. "All you have to do is say 'you know what? I'm just parking my car, minding my own business'. And you know what? He'd be eating right now."

Both the owner and Adolph said that's precisely what Myers did, but he asked for a supervisor because the police were questioning him.

Then the supervisor explains they had to respond to call.

"It's not that big of a deal," the supervisor said.

The Inn Season Cafe has not posted publicly about the incident but responded to a comment praising their actions saying "we have been fighting for love and compassion for 38 years and we have no intention of stopping anytime soon."

Royal Oak Police confirmed to FOX 2 they are aware of the incident and are conducting an internal investigation. They would not comment on the matter.

None of the Royal Oak Police Officers were identified.