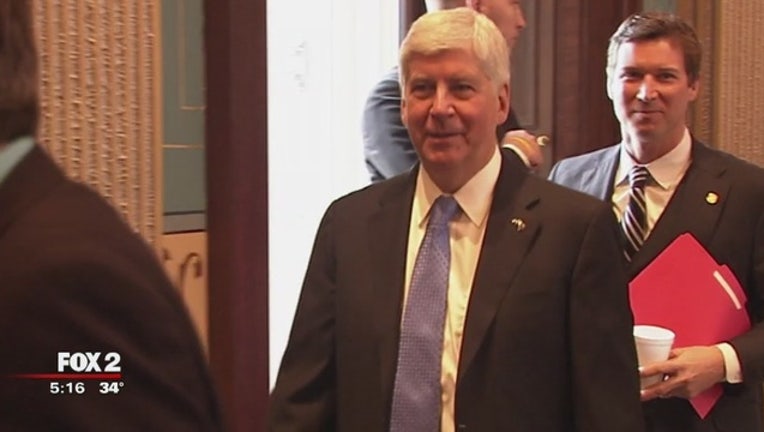 Lawmakers voted 30-2 to establish a fund within the state's Higher Education Student Loan Authority for Snyder's plan this upcoming fiscal year. Most of the money would be funneled into scholarships, career counseling, teacher grants and career-oriented programs within high schools in order to maintain a pipeline from high school graduation to a job in professional trade, information technology or another high-demand field.

The decline of the automotive and manufacturing industry has long put pressure on the state to figure out how it will train future workers to meet the needs of new jobs trickling into Michigan. Supporters of the Marshall Plan say that means training some students in technical and trade skills in lieu of only promoting a traditional K-12 education followed by a two- or four-year degree.

"Our state's talent gap is a critical issue and our partners in the state Senate today took a big step forward in helping to address that gap head on," Snyder said on Wednesday. "I look forward to working with the House to build on today's momentum."

The legislation drew praise from both sides of the aisle during the Senate vote and now heads to the House, which last month reduced Snyder's $100-million goal by 25 percent in its budget.

Snyder, a term-limited Republican, has made the Marshall Plan his top priority during his final year leading a state that has seen a steadily deflating talent pool since the Great Recession. More than 800,000 openings are estimated to emerge by 2024. But much of Michigan's workforce remains ill-equipped to veer from the traditional industrial job path - a factor many believe resulted in Amazon's decision in January to pass over Detroit and Grand Rapids as a potential location for its second headquarters.

"As technology rapidly changes the workplace, Michigan must continue to adapt and enhance the way it builds a talent pool," Roger Curtis, director of the Michigan Department of Talent and Economic Development, said. "The Marshall Plan for Talent is the catalyst for that."

Not all education experts agree. Lou Glazer, president of the Ann Arbor-based think tank Michigan Future Inc., said Michigan needs more college-educated workers to claw out of its talent rut. That is because the traditional liberal arts education gleaned from most four-year colleges is still the most valuable trait in an employee, he said.

"If you're a good welder, but you got broader skills when welding becomes automated, that's fine," he said. "If you don't have it, you're in trouble. The same thing is going to happen with (computer) coding."

Revamping the Michigan workforce also remains a salient issue in the 2018 governor's race to succeed Snyder. His lieutenant governor Brian Calley, a candidate for the GOP nomination, has thrown his support behind the Marshall Plan, while Democratic hopefuls have largely prioritized funding higher education in their proposals.