The teen girl touched a downed wire and was electrocuted, according to police.

FOX 2 - After a band of fast but powerful storms passed through metro Detroit, a trail of damage was left in its wake Monday night.

Amid few reports of injuries, a tragic death occurred in Monroe where a 14-year-old girl was killed by a live wire in the 1400 block of Peters Street, according to police.

The young girl touched the power line thinking it was a stick, and was electrocuted.

"Emergency personnel arrived to discover that the female subject was still in contact with the energized electrical line, which fell as a result of passing thunderstorm," police said in a release. "DTE Energy crews were contacted and disconnected the power lines, so emergency workers could attend to the victim. Once the scene was made safe and rescue workers could attend to the victim, it was obvious that she had succumbed to her injuries.

"Officers on-scene learned that the victim was walking with a friend in the backyard of her residence and believed that they could smell a bonfire.  The victim reached for what she believed was a stick, however, it was the charged electrical line. "

About 234,000 DTE Energy customers were left without power as the utility says that 658 crews are in the field working to restore power.

A huge tree narrowly missed a house in Troy as it was toppled during the early evening storms amid a number of reported close calls.

"All of a sudden we had this downpour of rain and then these crazy winds which I thought was a tornado at fist," said Diana Daghlas.

A strong line of Monday storms left signs of damage from northern Oakland County to Monroe.

In south Dearborn Heights the damage mostly fell between houses but damage reports stretched from Monroe to north Oakland County making for some tense and scary moments. In one case, a video of a powerline being hit by lighting was recorded by a viewer.

"It felt like a hurricane, you could feel the winds," said Daghlas. "It was blowing the screen door open. Like, it was not something you stand outside in."

Former University of Michigan football great Braylon Edwards tweeted that during the storm a car flipped in front of him, "sideways standing up" which missed him somehow.

There was been no word yet on verifying if SE Michigan had any tornados amid Monday's storms but this video from a view in Richmond shows a menacing funnel cloud.

"I'm on this earth for a reason and it's time to take it serious," he said online.

Numerous intersections were left around town with traffic lights out, and trees split all over.

Southfield resident Ken Harris saw the remains of storm damage when he rushed out of his home and saw a downed live wire.

"It was a gigantic orange fireball," he said. "I saw that one too.

"I was upstairs and I heard a transformer blow. My daughter was downstairs and said the neighbor's yard is on fire."

Firefighters waited for DTE to cut the power, standing guard to ensure it didn't spread and to keep from bystanders getting too close.

Due to the power outages and lack of water pressure, boil water advisories have been issued for Novi, Walled Lake and Commerce Township.

DTE wants to remind the public to stay at least 20 feet from any downed wire, do not cross yellow caution tape and do not touch anything that may be in contact with a downed wire. Please call 800-477-4747 to report downed wires. 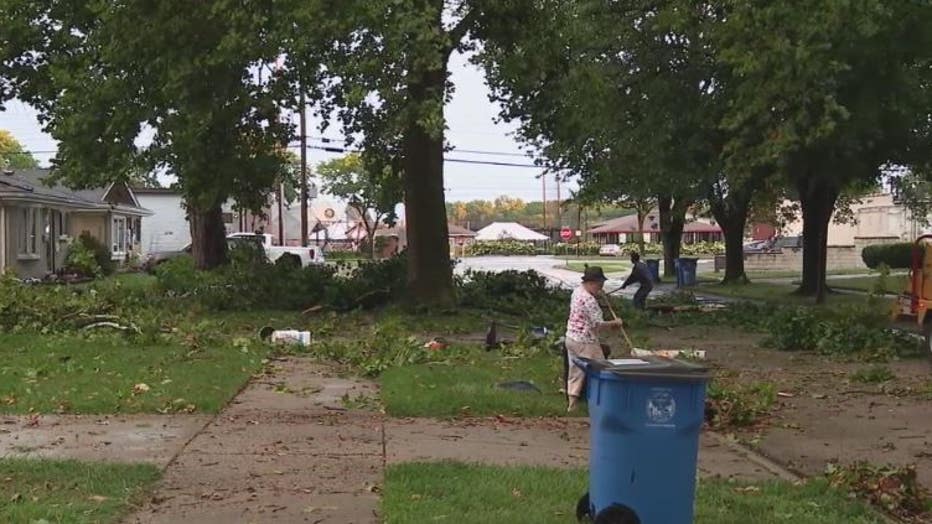