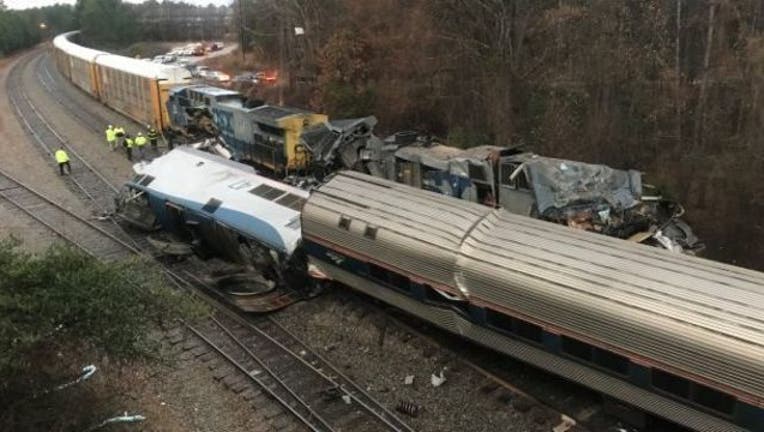 CAYCE, S.C. (AP) - A crash between an Amtrak passenger train and a CSX freight train in South Carolina on Sunday killed two people and injured about 70 others, authorities said.

The Amtrak train was heading from New York to Miami with about 139 people on board when the crash happened around 2:45 a.m. near Cayce, authorities said.

The lead engine and several passenger of Amtrak Train 91, which was operating from New York to Miami, derailed after coming "in contact" with the freight train, Amtrak said in an emailed statement. There were eight crew members and approximately 140 passengers on board.

The National Transportation Safety Board said it is deploying investigators to the scene.

The crash happened near a stretch of tracks by a rail yard about 10 miles (16 kilometers) south of Columbia, where several track spurs split off for freight cars to be unloaded. Authorities said they haven't determined if both trains were moving or if the Amtrak train was diverted on to a side track.

TV footage from the scene showed the aftermath of the crash, with the Amtrak engine on its side and its front crumpled.

The people who weren't hurt were taken in patrol cars to a shelter, Lexington County Sheriff's spokesman Adam Myrick said.

Palmetto Health spokeswoman Tammie Epps says 62 passengers were seen at three of its hospitals. Two of those passengers were admitted. The others appeared to have minor injuries that would not require hospitalization.