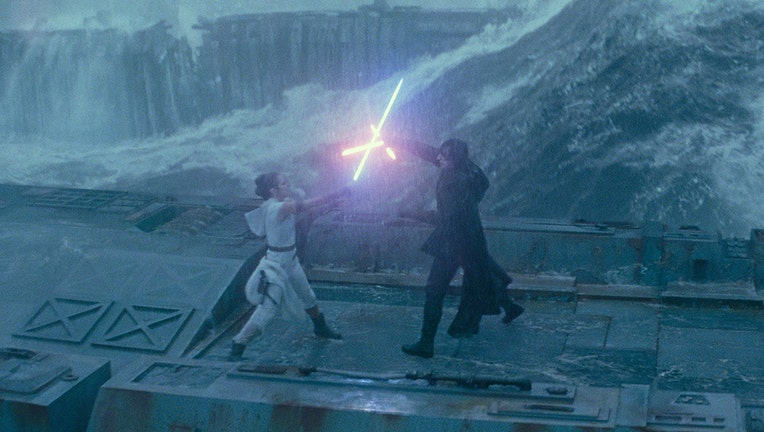 LOS ANGELES (AP) - When Disney bought Lucasfilm for more than $4 billion in 2012, there were lofty expectations of reviving "Star Wars" in spectacular hyper-speed fashion with a new trilogy that continued the story of Luke Skywalker and other beloved characters.

The space saga has been a smart investment, starting with "Star Wars: The Force Awakens," which in 2015 became the fastest movie to reach $1 billion. Despite the financial success, there's been a dark side -- fierce criticism of the new trilogy amplified by social media.

Some fans have attacked the story lines, which have shifted away from Skywalker toward a new generation of characters. The new films are more inclusive and feature a diverse cast and a focus on a female protagonist, Daisy Ridley's Rey, leading to volleys of racist and sexist remarks directed at the franchise's newest stars.

With "Star Wars: The Rise of Skywalker" opening in theaters Dec. 20, director J.J. Abrams expects more backlash. Especially since the new film -- which he calls the "aftermath of Luke Skywalker and his sister Princess Leia" -- is the final installment of a nine-part movie series that began 42 years ago.

"There are some people who, in this age of outrage, need to be vitriolic and hurtful, and that's not right," said Abrams, who returns after directing "The Force Awakens." He co-wrote and directed "Rise of Skywalker" after handing over the reins to Rian Johnson for 2017's "The Last Jedi," a blockbuster that received mostly positive reviews from movie critics but remains divisive among hardcore fans.

Several thousand fans signed a petition for Disney to remake "The Last Jedi," which showed Luke Skywalker as a surly recluse disillusioned with his powers. Even Mark Hamill, who played Skywalker in five films, said it was tough for him to comprehend the story's arc and see his character's idealism fade.  Johnson has said he received death threats from online trolls.

Abrams is a longtime "Star Wars" fan and understands fans are passionate. But he draws the line when comments attempt to demoralize the film's cast or production, which he says is a cultural issue, not a "Star Wars" one.

"That in no way is a "Star Wars" phenomenon," Abrams told The Associated Press. "That is a cultural phenomenon. If you're not in the right political party, you're against us. If you're not doing exactly what they want, then you're an abomination. It's sort of par for the course in everything right now."

Abrams said "Rise of Skywalker" is no way an apology for the previous film. The director said he's not worried about potential backlash or feeling any pressure heading into the release.

"If you're being crushed by a car and an elephant stands on the car, it's irrelevant," he said. "Like, it doesn't matter. There's a point at which the insanity of what it means to be working on a `Star Wars' movie blinds you. Anything past that threshold is just additional light, noise and weight. I know it's a lot. But you have to embrace and accept the responsibility that you've got. You want people to laugh and cry. That emotion can't come if you're constantly looking over your shoulder of what the studio might feel or the logistics or what the fans are saying. All you can do is the best job you can."

"Rise of Skywalker" faces galactic expectations. The filmmakers have promised it will be the conclusion of the Skywalker saga, a lineage that traces from Darth Vader through his grandson, the powerful Dark Side enforcer Kylo Ren.

"The Force Awakens" marked the first time the original trilogy's characters, Han Solo, Luke Skywalker and his sister Leia, would return to the big screen, though the focus has now shifted to new characters.

Ridley said she doesn't feel the weight of expectations mostly because she's not on social media. However, she said she intends to shut her cellphone off when the film premieres.

The actress learned when she signed on to play in "The Force Awakens" that she needed to find ways to block out the noise. Ridley said it helped that she didn't know much about Star Wars before joining the franchise.

"I wasn't questioning all of these small things that mega fans pick up," said Ridley, whose character was criticized for being unrealistically perfect. Some also questioned why Rey was able to obtain Jedi-like abilities much quicker than Luke Skywalker.

"I think if I had, I would've never gotten through the day," she said. "I had not thought about people comparing me to anyone, then suddenly they are. I guess Rey's story is similar to Luke's, but that part never computed. ... Social media does good things. It spreads the word. But I do think in general that people are so quick to be super cruel."

While Ridley avoided social media, her cast mate Kelly Marie Tran -- who made her debut in "The Last Jedi" as Rose Tico -- deleted her Instagram photos after some took aim at her performance, her physical appearance and made racial comments about her. She was the first Asian woman to play a leading role in a "Star Wars" film.

After she removed her posts, Tran published an essay in The New York Times  about the racism she endured online. Tran said the essay was hard to write, but one of the "best things she created."

"I don't think you know what to expect," said Tran, who admitted she didn't know much about Star Wars before joining the franchise.

Now, Tran is well aware and told the AP she tries not "to read things or let things into my ether that are not positive."

"What surprised me is just the depth of which people are passionate about this thing," she said. "But I just remind myself to protect myself creatively. Do things that feel good."

"Sometimes you ignore, sometimes you verbally say something," said Boyega, who plays Resistance fighter Finn and was among the first cast members to be criticized when a trailer revealed his character was a black Stormtrooper.

"Things can be quite rude," Boyega said. "But I'm from southeast London. If you give me a spike here, I'll give you a spike back. You take what you give. That's my rule. But apart from that, it's normal. You want them to continue that dialogue, because that's the original origin of their passion."