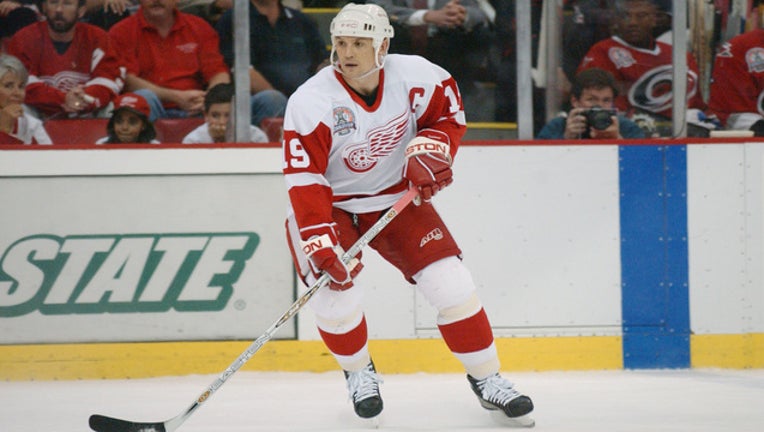 DETROIT (FOX 2) - Twenty-two seasons, three Stanley Cup titles, a spot in the Hockey Hall of Fame, and the hearts of Detroiters and hockey fans alike across the globe.

Over the course of two decades, Steve Yzerman cemented himself as one of the greatest hockey players to ever wear a Red Wings uniform.

Now the Captain is coming home to become general manager of the Red Wings. In light of the news, let's take a look at some of Yzerman's top moments on the ice.

At 21 years old, Yzerman became the youngest player to be named captain in franchise history. The following year, Yzerman would propel the Wings to their first division title in 23 years. The team only missed the playoffs once (1989-90) while Yzerman was captain.

In 1996, Yzerman became the 22nd player in the history of the NHL to score 500 goals. It was a power-play goal in the second period against the Colorado Avalanche at Joe Louis Arena that lead to a 3-2 victory. He joined Mr. Hockey himself Gordie Howe as the only Red Wings to score 500 goals. "I'm very happy to score it here in Detroit," Yzerman told the Associated Press. "In my 13 years here, I've seen a lot of familiar faces in the stands, people who have been season ticket holders. I'm glad I was able to get it here for them."

What could be better than scoring your 500th goal? Oh right, your 600th. In 1999, Yzerman became the 11th player in NHL history to score 600 goals in a 4-2 win against the Edmonton Oilers. The week prior, he topped 900 assists, joining Gordie Howe, Wayne Gretzky, Mark Messier and Marcel Dionne as the only players with 600 goals and 900 assists in the NHL, according to the Associated Press. Yzerman would finish his long career with 692 goals and 1,755 career points.

Yzerman lead the Red Wings to Detroit's first Stanley Cup in 42 years, sweeping the Philadelphia Flyers. And then he decided to do it again.  The Wings won the Cup again in 1998 against the Washington Capitals as Yzerman earned the Conn Smythe Trophy as playoff MVP. The first person he handed the Cup to was Vladimir Konstantinov, who was in in a wheelchair after car crash just a few days after they won the previous year's Cup (see the 14:40 mark of the clip below.)

Historic. Iconic. Quintessential. Describe it however you want, Yzerman's 1996 double overtime series-winning goal against divisional rival the St. Louis Blues was undoubtedly one of the most memorable of his career. It was Game 7 of the Western Conference semifinals in the Stanley Cup playoffs at The Joe. Deadlocked at zero-zero, the game entered double overtime. Wayne Gretzky turned over the puck to Yzerman at center ice just a minute or so in. Approaching the Blues' blue line, Yzerman drilled a slapshot that sailed past goaltender Jon Casey, clinching the win.