DETROIT - A Michigan woman coastal vacation aboard a massive cruise ship turned into a scene out of a horror movie.

For Rosalind McDavid, her trip on the Diamond Princess would start mid-January and feature island-hopping around Japan. But when they reached a south-facing city, things changed.

"We were going to stop in Tokyo of course and then a couple of islands in the Japan area," she said. "(Then) they told us to put our luggage back in. We still didn't know anything yet, but that's when we knew something was going on. He said that we'll be quarantined for 14 days."

Coronavirus had come. The global-reaching virus nearing pandemic status had made its way aboard the massive ocean liner, cutting trips short and confining tourists to their rooms for several days straight.

A Detroit woman had her vacation at sea cut short after the cruise ship she was on docked in Japan and the company quarantined tourists amid concerns of the coronavirus.

After the news went live, McDavid and her family were mandated to their rooms. A trip featuring gorgeous views and that refreshing ocean breeze would now be four walls.

"They said stay in the cabin. Don't go anywhere, don't even go on the balcony," she said. "They started delivering games Sudoku puzzles, crossword puzzles, games. We couldn't leave, nobody could come in."

While initial reports said that 10 people were infected with COVID-19, the number soon rose in the ship that had around 3,700 people on board. McDavid estimates it climbed as high as 700.

The quarantined vessel soon became a contaminated nightmare for those aboard. Docked at Yokohama, Japan, the ship would remain there for 14 days straight. The director of the US National Institute of Allergy and Infectious Diseases told USA Today "The quarantine process failed" after news came out a passenger who previously disembarked the Diamond Princess tested positive for coronavirus.

All the while, US residents aboard the ship received daily messages from the government.

"On 12th day, we got a letter from the U.S. Embassy Tokyo, saying they had a charted flight and we just cheered. We were so happy," said McDavid.

That flight took healthy passengers to Travis Air Force Base in California, where another quarantine was enacted for two more weeks.

"They had put up a fence all around, so nobody could escape, and they had four U.S. Marshalls out there at the time," said McDavid. 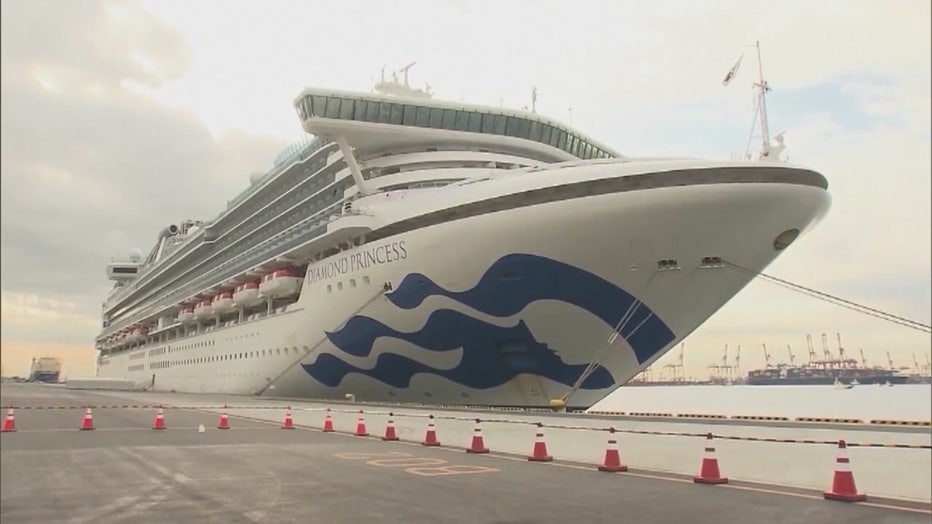 McDavid finally arrived home in Detroit on Monday. She said the cruise liner will reimburse her and her family for the ruined vacation. She says she's even planning the next trip.

"My brother was already on the Internet looking for something. We definitely plan to take one," she said.