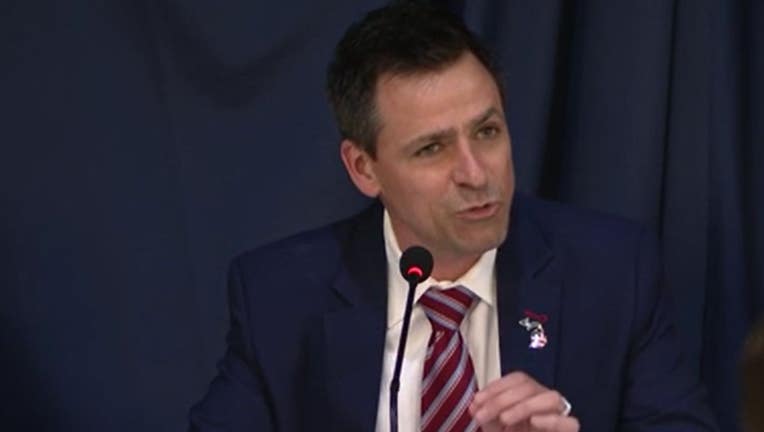 LANSING, Mich. (AP) - A suburban Detroit man sued Thursday to try to disqualify Republican Ryan Kelley from the Michigan governor’s race, saying he should be declared an insurrectionist whose votes won’t count.

Kelley faces misdemeanor charges for his role in the riot at the U.S. Capitol on Jan. 6, 2021. The lawsuit says the western Michigan man’s participation makes him ineligible for office under the U.S. Constitution.

The 14th Amendment states that anyone who has "engaged in insurrection or rebellion" against the U.S. and has taken an oath to support the Constitution cannot hold a state office.

Kelley took an oath in 2019 when he was a planning commissioner in Allendale Township, according to a lawsuit filed on behalf of Lee Estes.

"Whether it’s Ryan Kelley or anyone else that was illegally at the Capitol trying to overturn the will of the people, there needs to be accountability," said Lonnie Scott of Progress Michigan, a Democratic group supporting the lawsuit.

The Michigan Republican Party noted that the lawsuit was filed by attorney Mark Brewer, former head of the state Democratic Party.

"Claims of insurrection are laughable. ... Yes, I am on the ballot August 2. Yes, I will be on the ballot November 8," said Kelley, predicting victory.

Kelley is among five candidates in the Republican primary on Aug. 2. The winner will face Gov. Gretchen Whitmer in the fall.

Related: How to register to vote in Michigan

Kelley, a supporter of former President Donald Trump, has acknowledged that he was at the Capitol during the riot but said he didn’t go inside. He has pleaded not guilty to disruptive conduct, injuring public property and entering restricted space without permission.

Polls showed he appeared to get a boost after his June arrest.

The lawsuit seeks to have election officials disregard any votes for Kelley and tell voters that they can cast another ballot if they have voted for him in the primary with an absentee ballot.

In May, an attempt to have Republican Rep. Marjorie Taylor Greene barred from the Georgia ballot under the 14th Amendment failed. She said she wasn’t aware of plans to storm the Capitol or disrupt the electoral count through violence.