TAYLOR, Mich. (FOX 2) - Something went terribly wrong when a Taylor man was trying to hang his Christmas lights.

Luckily the fire department was able to come to the rescue.

Luckily it was the fire department to the rescue

"He's trying to get up and I am like, 'Be still Ray, don't move, we get the blanket,'" said Janet Psujek.

It's a good thing Psujek and her husband were hanging Christmas lights on their home at the time. They noticed when their neighbor Ray Ochoa, who was also putting up his lights, came crashing down. And they came running over.

"The ladder slid from underneath him and he came down face first," said Diane Ochoa.

"We called the fire department up, they showed up and immediately take care of Ray," said Psujek.

Diane says Taylor firefighters took great care of her 74-year-old husband, who ended up breaking five ribs and getting eight stitches above the eye.

"Just amazing but no more ladders for Ray," Diane said.

But then the firefighters went above and beyond the call of duty. Once Ray was safe and secure in the ambulance on the way to the hospital - they decided to finish hanging the festive lights around the house.

"I would want someone to do that for my dad or for my grandfather if they fell," said firefighter Bill Dudek.

"(Due to) the patient's age that would be a nice thing to do, keep him from going back on his roof when he got home," said Lt. Charles Krzciuk.

"It made me feel good. It was nice to help them and she was happy that [the lights] weren't just left hanging there," said Capt. Mesky.

Janet was so impressed by their good deed, she snapped a few pictures of their Christmas spirit and posted it on Facebook. The likes haven't stopped. 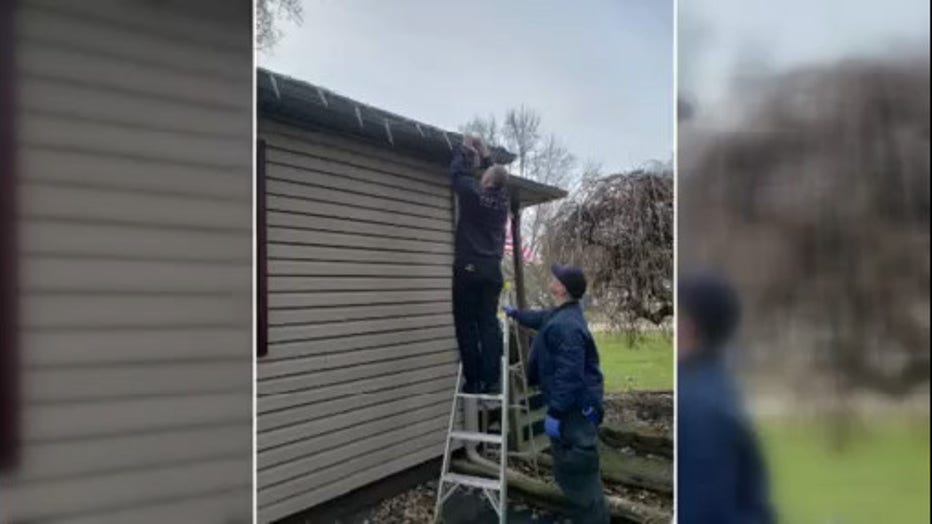 "It was such a good thing. People don't do it nowadays, they just don't," she said. "You always see so much negative stuff on Facebook always dumping on the police and the fire department, I'm like no this is going to be a good thing."

Janet says she wants to do something more to show her appreciation, but firefighters say knowing they helped someone during their time of need is all the thanks they need.

"It is a privilege to be able to serve our community and do what we do," Dudek said.

"I would just like to say thank you so very much, it was such a kind gesture on their part," Janet said.