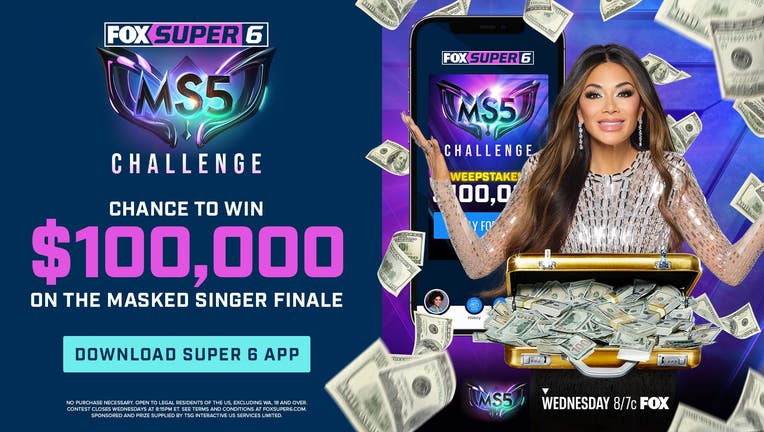 With a player base of more than 4.6 million to date, FOX Super 6 has given out over $220,000 in prizes over season 5, with hundreds of winners cashing in.

LOS ANGELES - The fifth season of "The Masked Singer" has proven to be a wild ride. Not only have fans experienced surprising reveals, but they’re also lining their pockets with cash — and for the season finale, one lucky winner will have a chance to net a whopping $100,000.

With a player base of more than 4.6 million to date, FOX Super 6 has given out over $220,000 in prizes over season 5, with hundreds of winners cashing in. Each week, viewers of "The Masked Singer" are given the opportunity to correctly predict six questions related to the episode on the FOX Super 6 app to increase their chance of winning.

Questions this week are as follows:

For every correct answer, players will get an entry for the finale prize drawing for a chance to win the big cash prize.

Only three costumes remain in the battle on "The Masked Singer": Chameleon, Piglet and Black Swan. All contestants will sing their hearts out next Wednesday for the Golden Mask Trophy.

RELATED: ‘The Masked Singer’ just unmasked the Yeti and Cluedle-Doo in one of the most shocking reveals

Omarion, best known for being the lead singer in the band B2K in the early 2000s, was the latest contestant to be sent home Wednesday night.

During the shocking double reveal on Wednesday night’s episode, the Yeti, a contestant that many judges considered a top contender for the season, was unmasked after the reveal of Cluedle-Doo.

"Even though this was a competition, did I really lose? No, I really didn’t," Omarion, 36, told FOX Television Stations. "I gained so much with this experience."

The father of daughter A'mei Kazuko Grandberry, 5, and son Megaa Omari Grandberry, 6, said his children did not know he was performing on the show but that it didn’t stop them from guessing.

"They did see a few performances, and they were like, ‘Wait a minute, that sounds like dad. Dad, is that you?,’" Omarion shared. "After the reveal last night they were so excited. My son was like, ‘Dad, I’m gonna be the little Yeti. I think I’m gonna be on The Masked Singer now.’"

While on the FOX show, Omarion gave a soulful and heartfelt rendition of Justin Bieber and Benny Blanco’s "Lonely," making panelists and audience members tear up.

The Yeti broke history as the first contestant to perform in roller skates.

"I know what it feels like to be lonely. I think everyone does. I think that sometimes being lonely gets kind of a bad rap, but it’s so important to self-reflect and spend that time rejuvenating and getting to know yourself. I was able to bring that emotion because I know it’s human nature," the "Ice Box" singer shared.

And, according to Omarion, his appearance on "The Masked Singer" may not be over yet.

"Keep watching The Masked Singer. You might see me as a judge, you never know these things," Omarion hinted.

The FOX Super 6 contest is live now, so download the app for free for your chance to win the $100,000 finale grand prize.