But it's that spontaneity that breeds some of the best products - and a whole lot of money.

Ever heard of www.tvstoreonline.com/? It's ground zero for all the TV, movie and entertainment T-shirts you could ever want. Before the website kicked off in 2004, Mark Hajjar had been selling vintage t-shirts out of his dorm room.

With a few good ideas, a lot of determination and the bond of his brother Fred, the two created a multi-million business selling the clothes.

"Very fortunate - my family works here. My brother and two sisters and sometimes it is surreal," said Mark.

The two have also joined forces to create uglychristmassweater.com - which shouldn't take much imagination to understand what that is. Mark follows a simple business mantra: "the crazier, the better," he says. His brother would agree.

"Whether it's going home at night at a bar drinking or we just always think of different ideas wherever we are," said Fred Hajjar.

And as for their latest creation, they're introducing the Flappy suits.

Welcome to the future of Halloween innovation. Two brothers at the top of their clothing game specialize in the whacky gifts that everyone loves. That may be your favorite show on a shirt or an ugly Christmas sweater. Welcome to their newest bit of clothing: the flappy suit. Air pumps located inside the ears, tails and wings of suits now move. You can bet kids will love it.

"I have always been interested in interactive costumes and with kid's costumes, you can't really use electronics, they're hard to wash so I  came up with the idea to use a hand pump," Fred said. "So it's no electronics or anything and it creates the kid costume to move and be interactive. It's really cool."

Take any animal costume, put air pumps in the wings, tails, and ears, give their inflatable capability to the kids wearing them and voila! You have flappy suits.

Isabelle has a unicorn costume and can flap her wings.

Sabastian has a dog costume and can wiggle his ears.

"So I'm a dog. It can be the playful puppy or the dangerous dog so there's secret airbags in the hands that cause different parts of the costume to move," said Sabastian. 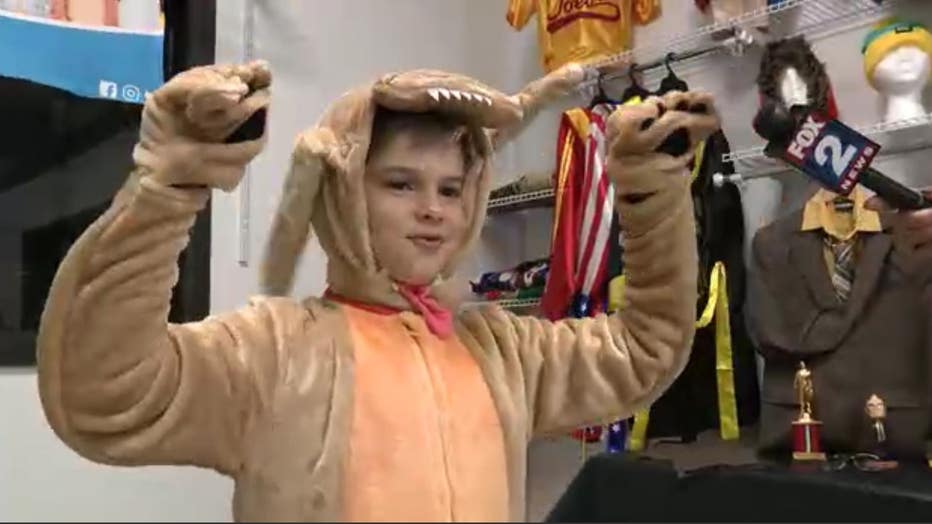 Together, Fred and Mark have sold 1,000 flappy suits in the first week since hitting the Internet. Those costumes aren't limited to dogs and unicorns, however. There's kitties, pandas, bunnies or any mythical creature you can think of.