ST. CLAIR SHORES, Mich. - Tillie, the Maltese Yorkie mix carried nothing but a pink ball and a care-free attitude while playing fetch in her backyard on a late June afternoon.

But it was just a week ago when Rick and Dawn Torina were unsure if they'd ever see their 6-year-old dog again.

"He just T-boned me right on my side of the car and I did a couple three-sixties and ended up on the side of the road," recounted Rick.

Rick, a resident of St. Clair Shores, had been hit by a drunk driver. Pictures after the crash show a completely destroyed driver-side of the car. The passenger door behind the driver appeared to be falling off.

Rick and Tillie were on their way to their summer home in Lexington when the drunk driver hit them near Marysville. Firefighters rushed to rescue the duo, which is when Tillie took off. First responders tried catching her - but couldn't.

"They came back and said 'I'm sorry, but she's gone into the woods' and I was devastated. We all were," he said.

The Maltese Yorkie mix loves fetch and her family and until last week their life in St. Clair Shores was fairly normal. But then, they were hit by a drunk driver.

Rick wasn't interested in even going to the hospital after the crash. Despondent about his missing dog, he begrudgingly went. There, he met Jessica his nurse - and told her how worried he was.

"The nurse that took care of him at the time asked if she could share our story on her Facebook," said Dawn, Rick's wife.

There was no stopping the search after that. Word spread of Tillie's absence and a couple of dog rescuers pinpointed the spot where they thought she might be. Dawn and her sister Renee blanketed the area with fliers. A sympathetic gesture came from the print shop which declined to charge for the fliers.

Everywhere, people were talking about Tillie.

Finally, after five long days of looking, the Torina's got the fateful call. Someone had spotted their missing pup in St. Clair Township and called Dawn. A video taken of Tillie in someone's backyard shows her being coaxed out of the woods. 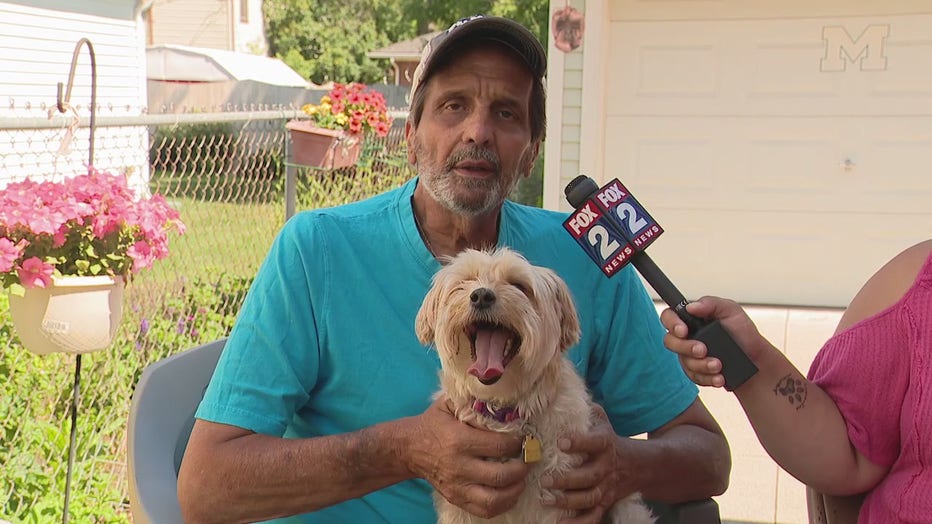 The only thing more storybook than the happy reunion was where she was found. Dawn calls the final detail the frosting on the cake.

"The nurse that took care of my husband in the hospital, it was her family's property that the dog was found on and I just couldn't believe it," she said.

"All these people with their kindness, especially at this time when there's so much negativity going around, it was nice to have a feel-good story to tell," she added.