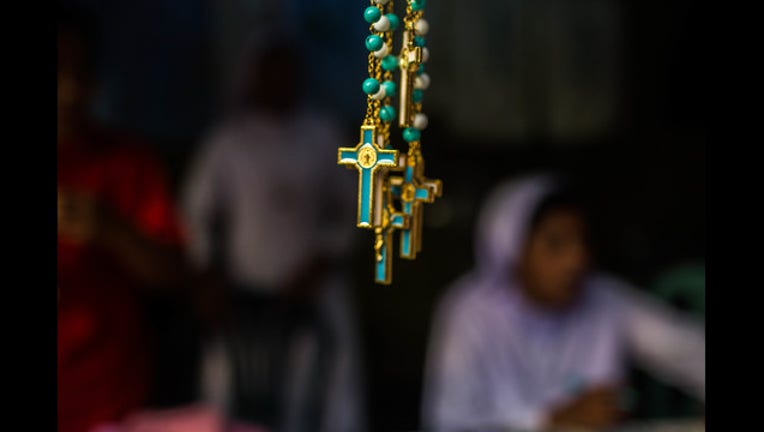 (FOX 2) - An investigation has led to almost two dozen charges filed against five Catholic priests in Michigan for sexual abuse of children. Attorney General Dana Nessel says this is just "the tip of the iceberg".

Nessel announced 21 criminal sexual conduct charges against five priests that served in dioceses in Detroit, Lansing and Kalamazoo. She says four of them have been arrested in Arizona, California, Florida and Michigan, and that the fifth awaits extradition from India. The victims range in ages 5 to 26 years old and include four boys and one girl.

Members of the attorney general's clergy abuse investigative team has been reviewing hundreds of thousands of documents seized from the state's dioceses last October. The clergy abuse hotline has received more than 450 tips since the beginning of the year.

Nessel said nearly all the charges came as a result of calls to their tip line that were later corroborated by files that were seized from the dioceses last fall and multiple interviews with victims. They estimate the team has only process about 5-10 percent of the information they have.

"This is only the tip of the iceberg because we have hundreds of thousands of pages of documents from every diocese in the state that we haven't yet reviewed and we continue to scour," she said. "So we anticipate many more charges and arrests."

She said more calls are coming in, including one last night from someone who heard about charges against a particular priest and wanted to report that they were a victim.

Timothy Michael Crowley, 69, Lansing Diocese, was charged in Washtenaw County with four felony counts of Criminal Sexual Conduct (CSC) 1, a maximum sentence of life in prison and a lifetime of electronic monitoring, and four felony counts of CSC 2 - a maximum sentence of 15 years in prison. Crowley, who was a priest in various parishes, including St. Thomas Rectory in Ann Arbor, was arrested Thursday in Tempe, Arizona. Nessel said the charges involve sexual penetration of a child. She said Crowley abused his position of authority, and the charges stem from abuse from before the child turned 16 and after.

Neil Kalina, 63, Archdiocese of Detroit, was charged in Macomb County with one felony count of CSC 4, a maximum sentence of 15 years in prison and a lifetime of electronic monitoring. Kalina, who was a priest at St. Kiernan Catholic Church in Shelby Township, was arrested Thursday in Littlerock, California. Nessel said while he's no longer a priest, he's apparently now a youth counselor running an organization called Operation High Hopes that they believe he founded to prey on marginalized teenagers.

Patrick Casey, 55, Archdiocese of Detroit, was charged in Wayne County with one felony count of third-degree CSC, a maximum sentence of 15 years in prison. Nessel said this charge stems from allegedly performing oral sex on a child during confession "while acting as the victim's spiritual counselor." Casey, who was a priest at St. Theodore of Canterbury Parish in Westland, was arrested Thursday in Oak Park, Michigan.

Jacob Vellian, 84, Kalamazoo Diocese, was charged with two counts of Rape, a maximum sentence of life in prison. Vellian was a priest at St. John the Evangelist Parish, Benton Harbor, and now lives in Kerala, India. Nessel said this occurred with a victim who was both under and then later older than 16. "He is proof positive that you cannot live long enough nor can you move far enough away to escape our investigation," Nessel said. She said they are making efforts to extradite him.

In addition, the professional educationally limited counselor's license of Lawrence Ventline, a priest with the Archdiocese of Detroit, was summarily suspended by LARA last week and the Attorney General has filed an administrative licensing complaint against him. He is alleged to have sexually assaulted a Michigan resident. Nessel said Ventline that as of two weeks ago, Ventline was still accepting children as clients. She said his crimes were outside the statute of limitations so he could not be criminally charged.