(FOX 2) - This week, our Jill of All Trades, Jill Washburn, shows us how to change out a lockset on an entry door. Jill says that every key to her house had been lost, which left her unable to fully lock up the house. It was clearly time to take action.

Her choices were to re-key the current locks or replace all the locks. The locksets were still in good enough shape that they still had a lot of life left, and rekeying them would save a ton of money, so Jill chose to go that route. There was only one problem…

Jill of All Trades re-keys her lockset

In this episode of Jill of All Trades, Jill shows us how to change out a lockset.

To re-key the locks, you need to have at least one original key so the locksmith can get into the cylinder, and that didn't exist anymore. So, now what? Well, sometimes a locksmith can make a temporary key to get into the lock. The issue with that route becomes the cost.

It costs about 15 bucks to re-key a lock. If the locksmith has to make a temp key, that adds $25 to the cost. With the cost now up to $40, you're close to the replacement cost for a new lockset.

**NOTE** Jill's locksmith told her that it is usually easier to make a temporary key from a deadbolt lock, rather than a doorknob lock. Again, Jill lucked out, because three of the locks she was having re-keyed were deadbolts.

With that covered, let's get down to the business of removing the locksets. 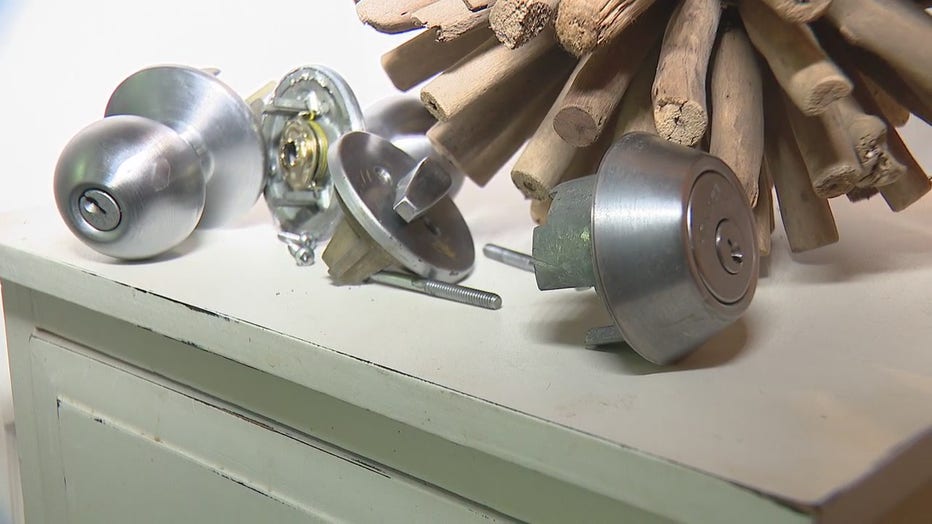 The doorknobs should all have two screws on the indoor side of the lockset. Simply remove those screws, set them aside, and you should be able to pull the doorknobs, both interior and exterior, off. It's that simple. Leave the inside part at home. It is only the outside part that you will need to take to the locksmith.

The deadbolt is much the same. There are two screws on the interior side. Simply remove those screws. Again, set them aside for later. And you should be able to pull off both the interior and exterior sides of the deadbolt. Leave the interior half at home. The exterior half is the only part you need to bring to the locksmith.

Re-keying one lock only takes a few minutes. If you have several, like Jill did, you may need to drop them off and come back later. Once you have them re-keyed, it's time to reverse the process and re-install them. It's may be a little trickier to line everything up when you're re-installing, but it's not difficult.

Let's start with the deadbolt. It should actually be marked on the backside of the pieces as to which side of the door it goes on and which side is the top. Put the outside part on first, says Jill, taking care to kind of feed it through the mechanism for the sliding bolt. It may take a little wiggling to get it through just right. The keyhole should be straight up and down. Once that's in, keep holding it in place (a helper will come in handy here, says Jill) and put the interior part back on, taking care to line up the screw holes. When it's where it should be, Jill says you should be able to feel it all settle into place. Once that happens, just replace the screws and tighten them down. Test the lock from both sides. You should be good to go!

Now, onto the doorknob. Again, Jill recommends, start with the outside. There will be a long stem that comes out of a square housing. Jill says that you want to get that square housing through the center of the sliding bolt mechanism that is inside the door. As with the deadbolt, it may take a little jiggling or jostling to get it to line up and feed through. Once that's through, hold it in place (or have your helper hold it) and then replace the interior doorknob. Getting that long stem to feed into the doorknob will likely take a minute or two. Just keep jiggling it and adjusting the position until you feel it feed through and set into place. Once you have that, all you have to do is replace the screws and tighten them down. Again, says Jill, test it from both sides, but you should be good to go.

So now you know how to remove and install a lockset and a deadbolt. That will work for you whether you're replacing old ones for new, or removing and re-installing one for re-keying. Either way, you'll save yourself a ton of time and money versus having a locksmith or handyman come out to do the job.