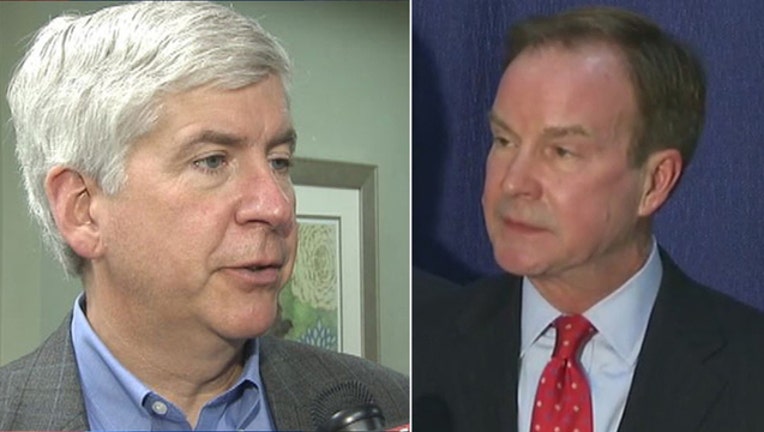 (WJBK) - There is a myth out there that just because somebody calls him or herself a Republican or Democrat, he or she is in step with all the other party members on the face of the earth.

The current and ugly civil war over the Trump nomination in the national GOP would be Exhibit A. Exhibit B in Michigan does not even come close to that level of internal discontentment, but some friction between the gentleman who sits in the governor's seat and the one in the attorney general's chair is palpable.

Everything is "fine" A.G. Bill Schuette professed the other day as the media dove into the state of their political marriage. Gov. Snyder has described the relationship as "professional" which is just another way of saying these two are not blossom buddies.

There is no question Gov. Rick Snyder and his fellow Republican Mr. Schuette have not seen eye to eye on some serious issues. Foremost would be the huge disagreement over the expansion of Medicaid to insure 600,000 uninsured in Michigan. The governor burned up a lot of capitol to squeeze this through a recalcitrant GOP legislature. He eventually cobbled together enough Rs to go with a significant amount of Ds to get the job done but no thanks to Mr. Schuette who stuck his nose into the debate and single-handily made the governor's job that much tougher.

Nobody in the Snyder administration went public with this but somebody must have been thinking: Since the issue was not a legal question before the Attorney General, what was he doing playing around in the policy arena on this top priority for the boss? Ditto for opposing the governor's ballot proposal to fix the roads.

Some dismiss it as just "Bill being Bill." He's a political animal by nature and since he was elected on his own right, by definition he can pretty much do whatever he pleases with or without the governor's blessing. And when you are running for governor, you seek to curry favor with the electorate whenever you can. And since many voters were not in love with anything that looked like Obama-care light, the theory goes Bill Schuette was on duty trying to cash in on the opposition.

Tradition suggests the A.G. is suppose to be the governor's lawyer.

Yet,  Mr. Governor found it necessary to hire his own private lawyers to guide him through the legal mine-field known as the Flint water crisis. One ponders if everything was so grand between these two Republicans why didn't Mr. Snyder save the state a ton of money by merely using the lawyers the state already has on the payroll?

Asked to reflect on all this, Mr. Schuette offered, with all due respect, that the capitol news hounds, "over-think these things and provide greater scrutiny than it might deserve."  Translated: The media is making something out of nothing, which, of course, has never stopped the media from doing it anyway.

Look it. In a political town where the relationship between all the players has an impact on what gets done, or not, most journalists would conclude the scrutiny is warranted and you can never think too much about this stuff.

Mr. Snyder does not enjoy the internal machinations of moving the political pieces around while Mr. Schuette thrives on it. Mr. Snyder abhors confrontation. Mr. Schuette is not bashful about taking it on full force. And so on.

"I think it's O.K." that there are differences he asserts.

It's a good bet that the folks in the gov's inner circle are not nearly as sanguine about it. One source used the word "publicity hound" in relationship to the A.G. but the governor says he never used the word, "not to my knowledge."

The gov's guys know that Mr. Schuette wants the seat that the governor occupies and they may figure when Bill is being Bill he is looking out for his own self interest and his client the governor comes second?

The A.G. concedes that the "staffs" in both offices "might get competitive," but he tells his squad to tap it down. "Stay in our lane," he advises his minions.

"I don't worry about that," he asserts with a comment that may not be shared by his fellow Republican Richard Dale Snyder.