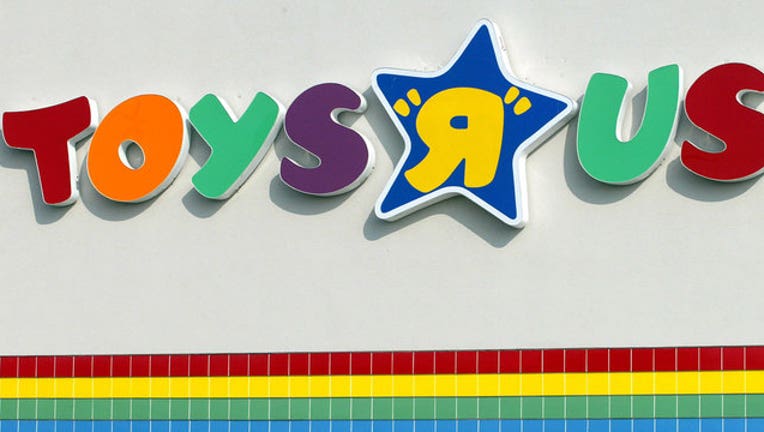 A Toys R Us sign is visible at one of its stores January 28, 2002 in Arlington Heights, Illinois. (Photo by Tim Boyle/Getty Images)

NEW YORK (AP) - Toys R Us, squeezed by Amazon.com and huge chains like Walmart, will close 180 stores, or about 20 percent of its U.S. locations, within months.

Six stores in Michigan are reportedly closing, including locations in Muskegon, Traverse City, Lansing, Grand Rapids and two locations in Ann Arbor. The Ann Arbor locations are on Carpenter Road and Washtenaw.

Hobbled by $5 billion in debt, the company that once dominated toy sales in the U.S. filed for bankruptcy protection in September.

Chairman and CEO Dave Brandon said in a letter Wednesday that tough decisions are required to save Toys R Us.

Toys R Us operates about 900 stores in the U.S.

The store closings will begin in February and the majority of the targeted locations will go dark by mid-April. At some other locations, the retailer is combining its Toys R Us and Babies R Us stores.

Toys R Us, based in Wayne, New Jersey, has struggled with debt since private-equity firms Bain Capital, KKR & Co. and Vornado Realty Trust took it private in a $6.6 billion leveraged buyout in 2005. The plan had been to take the company public again, but weak sales have prevented that from happening. With such debt levels, Toys R Us has not had the financial flexibility to invest in its business.

While its numbers have been shrinking, Toys R Us still sells about 20 percent of the toys bought in the U.S. according to Stephanie Wissink, an analyst at Jefferies LLC.

Competitive pressures will force the company to take a close look at all of its stores, and more will likely be shuttered over the next year or two, Wissink said.

Toys R Us reigned supreme in the 1980s and early 1990s, when it was one of the first of the "category killers" -- a store totally devoted to one thing: toys. Its scale gave it leverage with toy sellers and it disrupted general merchandise stores and mom-and-pop shops.

Now Toys R Us and other category killers like the now-defunct Sports Authority, Borders and Circuit City, are being upended by a new force: Amazon.com.

GlobalData Retail estimates that about 13.7 percent of toy sales were made online in 2016, up from 6.5 percent five years ago.

Toys R Us has been hurt by a shift to mobile devices as well, which take up more and more play time.

About three dozen retailers sought bankruptcy protection last year due in large part to a radical shift in consumer behavior, both in where they shop, and what they buy.

Toys R Us closed its flagship store in Manhattan's Times Square, a huge tourist destination, about two years ago.

The struggles of Toys R Us have rippled outward and rumors continue to swirl around the possibility of a merger between Mattel and Hasbro, the nation's largest toy makers.

Wissink estimates that Toys R Us accounts for about 11 percent of Mattel's annual sales and about 9 percent of Hasbro's annual volume. Shares of both Mattel Inc. and Hasbro Inc. slipped in early trading.

"(Toys R Us) store closings will reduce rent expense and allow the company to focus all of its operating efforts on only its best locations," said Moody's lead retail analyst Charlie O'Shea in a report published Wednesday.

Brandon said Wednesday that the company made some missteps during the critical holiday shopping season.

"As the leader of this company, I want you to know that we can and will address the gaps in the experience that you may have had when shopping this holiday," Brandon said. "My team is already hard at work to make the improvements necessary to ensure that we have the products you want, when, where and how you want them."