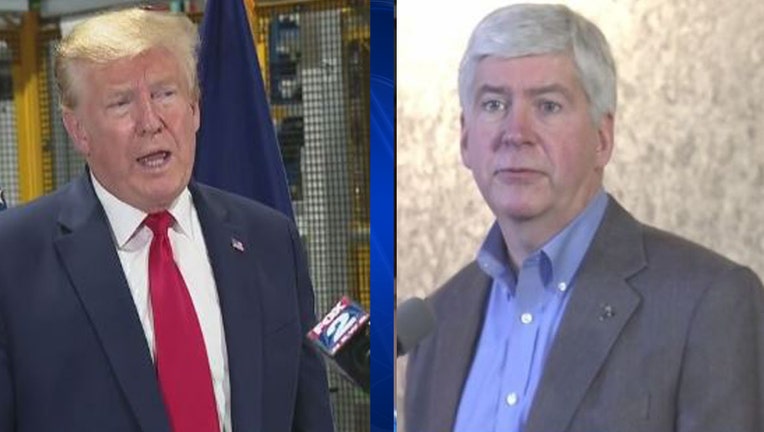 And not surprisingly, Trump pulled no punches with a fiery tweet blaming him for the Flint water crisis and saying he had failed as Michigan governor.

Trump tweeted: "The failed former Governor of Michigan, RINO Rick Snyder, who was responsible for the Flint Water Disaster (and I let him know it!), is now endorsing Sleepy Joe Biden, who doesn’t have a clue! Snyder, whose political career was ruined by Flint, hurt a lot of people in Michigan.

"I’ll take the Endorsement of Law Enforcement all over the Country, and Joe can have the RINO’S. This Snyder mess was made during the OBiden era - no wonder they’re friends!"

RINO is used as slang for "Republican In Name Only." The social media blast comes one day after Snyder spoke to FOX 2 Lansing insider Tim Skubick, saying that Biden was better for America and a short time since a USA Today Op-Ed in which he called the president a bully.

In that Op-Ed Synder cited a need to return to civility while calling out the president who "lacks a moral compass" and "ignores the truth."

On Tuesday Snyder expounded on those thoughts speaking to Tim Skubick saying, "I'm a proud Republican," said Rick Snyder. "But I have to think about what is best for America. And in this case, Joe Biden is a better choice for America than Donald Trump in my view."

The state of Michigan has reached an agreement with residents of Flint that includes $600 million in settlement money, after a years-long lawsuit over the Flint water crisis.

After 18 months of negotiations, the Attorney General Dana Nessel announced the state and lawyers representing thousands of residents harmed by the city's switch to a different source of water had come to a consensus on damages.

A criminal probe was launched late in the Snyder administration under AG Bill Schuette but charges were dropped under Nessel.