WASHINGTON - President Donald Trump on Tuesday discussed his expected female Supreme Court nominee to replace the late Justice Ruth Bader Ginsburg in an exclusive, wide-ranging interview with FOX TV Stations — covering topics from his COVID-19 response and campaign rallies amid the pandemic to civil unrest across the country.

“I would say I’m very close to making a decision in my own mind, and I will reveal that on Saturday,” Trump said. The president added that he would delay announcing his pick until the weekend out of respect for Ginsburg, who will lie in repose at the Supreme Court this week.

Trump says he plans to announce his choice to replace the late Ginsburg on Saturday, setting off one of the quickest confirmation processes in modern times

Just prior to the interview, Republican Sen. Mitt Romney of Utah said he supports voting to fill Ginsburg's seat. Romney’s vote all but ensures that the president will have the backing to confirm his nomination in the Senate, despite Democrat’s objections that it’s too close to the Nov. 3 election.

Trump met Monday with Judge Amy Coney Barrett as the conservative jurist emerged as a favorite, according to the Associated Press. The president also discussed Judge Barbara Lagoa, who he called “terrific,” and Michigan's Joan Larsen, a federal appeals court judge.

“I’m more than hopeful. I think it’s going to happen,” Trump said, confirming that he will be nominating a woman.

Regarding the United States’ response to the coronavirus pandemic this year, Trump said the country has done “an amazing job,” and “the only thing we’ve done a bad job on is public relations.” 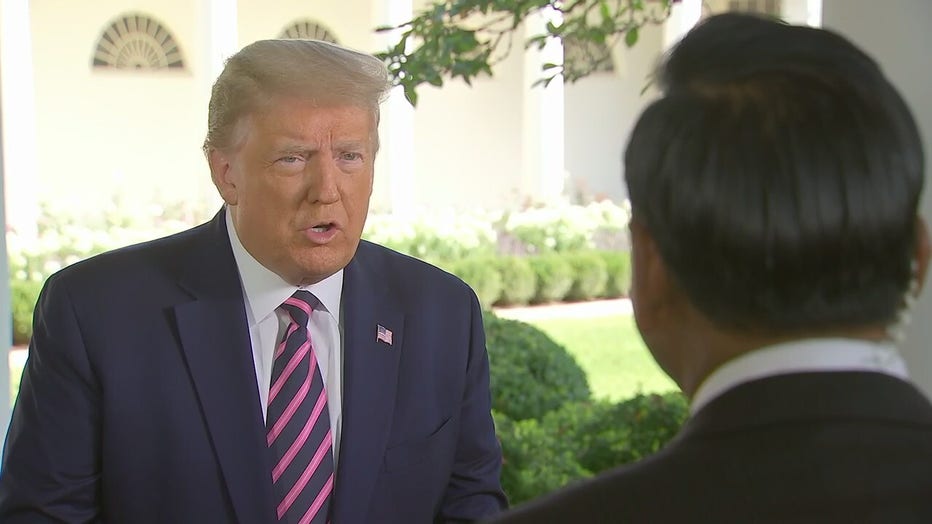 Trump’s larger campaign rallies have sparked criticism amid the ongoing pandemic due to some maskless attendees and a lack of social distancing, as recommended by U.S. public health officials. The president defended the events, saying that he sees “a lot of people with masks” and the events are being held outside in “airports and hangars.”

“I think people should wear a mask if they can,” Trump said. “I don’t think it should be a mandatory policy.”

“If you look at what he did with the swine flu, it was a disaster,” Trump said. “Joe doesn’t have a clue, and Joe would not have done a very good job.”

On Monday, the Justice Department identified New York City, Portland and Seattle as three cities that could have federal funding slashed under a memorandum by Trump that sought to identify localities that permit “anarchy, violence and destruction in American cities.”

The designation, which could open the door for the federal government to cut off some funding to the cities, drew immediate criticism from local elected officials.

Trump denounced Democratic leaders in a number of cities, including Portland, Chicago and New York City.

During a discussion with FOX 2's Roop Raj, the president praised the Detroit police chief.

“It’s all Democrats that don’t have any idea of law and order,” Trump said. “The Republican cities and states are doing phenomenal now.”

“We could close down Portland and the problem in Portland in 30 minutes. But they don’t want us to bring in the National Guard,” he said.

But Trump added that he supports “peaceful” protests in the U.S.

“There’s something going on, but nobody has done more for the Black community than me since, at least, Abraham Lincoln.”

FOX TV Stations has reached out to Joe Biden's team to conduct a similar event.