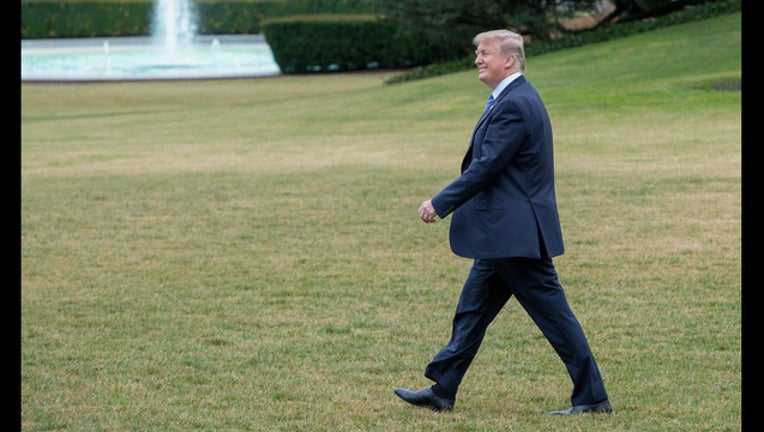 WASHINGTON, DC - FEBRUARY 16: President Donald Trump walks from the Oval Office to the Marine One helicopter as they depart from the South Lawn of the White House on February 16, 2018 in Washington, DC. (Photo by Tasos Katopodis/Getty Images)

WASHINGTON (AP) - President Donald Trump is endorsing Mitt Romney in Utah's Senate race, another sign that the two Republicans are burying the hatchet after a fraught relationship.

The GOP's presidential nominee in 2012, Romney announced last week he would seek the nomination to replace retiring Sen. Orrin Hatch. In a tweet Monday night, Trump wrote, "He will make a great Senator and worthy successor to @OrrinHatch, and has my full support and endorsement!" Romney quickly accepted the endorsement via Twitter.

Trump has not always been so positive about Romney the political candidate. In 2016 Trump said the former Massachusetts governor had "choked like a dog" during his failed 2012 bid against President Barack Obama.

For his part, Romney gave a scathing critique of then-candidate Trump during the GOP primary that year, calling him a "phony" who was unfit for office. More recently, Romney criticized Trump's response to last year's deadly white supremacist rally in Charlottesville, Virginia, and last month called Trump's use of an obscenity to describe African countries as inconsistent with American history and values.

Members of both political parties have suggested that Romney, if elected to the Senate, would continue to call out Trump if he believed the president warranted criticism. However, Romney did not mention Trump or his scandal-plagued administration in his campaign announcement on Friday, focusing instead on how his adopted state of Utah could be a model for better government in Washington.

Asked Friday if he would seek or accept Trump's endorsement, Romney demurred but said they had talked on the phone two or three times in recent months and had a cordial and respectful relationship.

Within minutes of Trump's tweet Monday night, Romney sent one of his own: "Thank you Mr. President for the support. I hope that over the course of the campaign I also earn the support and endorsement of the people of Utah."