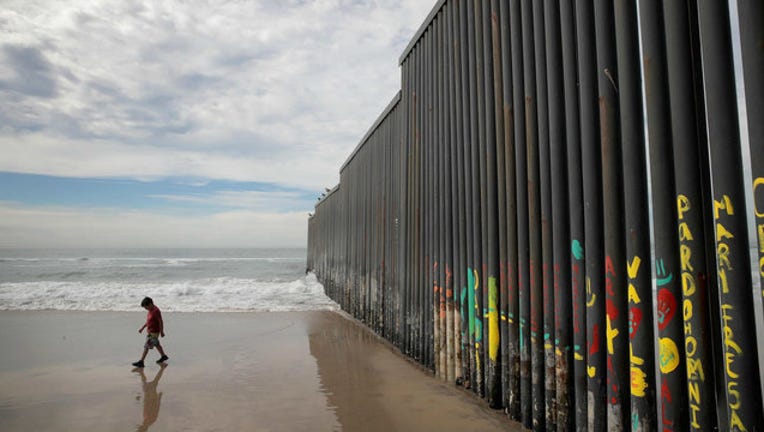 A child walks along the beach near the border wall that separates the U.S. and Mexico on January 28, 2019 in Tijuana, Mexico. (Scott Olson/Getty Images)

WASHINGTON (AP) - President Donald Trump will seek $8.6 billion in his new budget to build the U.S.-Mexico border wall, an administration aide said Sunday, setting up another showdown with Congress, which has resisted giving him more money for his signature campaign promise.

The request would more than double the $8.1 billion already available to the president after he declared a national emergency at the border in order to circumvent Congress after lawmakers refused his funding demands. That standoff led to a 35-day partial government shutdown, the longest in U.S. history.

The official confirmed that the request was part of Trump's spending blueprint for the 2020 budget year. The official was not authorized to publicly discuss budget details before Monday's release of the plan and spoke on condition of anonymity.

Budget proposals are merely a starting point in negotiations, but Democrats immediately rejected the border request.

"Congress refused to fund his wall and he was forced to admit defeat and reopen the government. The same thing will repeat itself if he tries this again," said House Speaker Nancy Pelosi, D-Calif., and Senate Democratic leader Chuck Schumer of New York. They said the money "would be better spent on rebuilding America."

The budget arrives as Trump's Republican allies in the Senate, uneasy over the emergency declaration, are expected this coming week to debate terminating it. Some view it as an overreach of executive power. Congress appears to have enough votes to reject Trump's declaration, but not to overturn his pledged veto of their action.