MONROE. Mich. (FOX 2) - The owners of a Monroe Papa John’s say every month since the pandemic began it got harder and harder to justify remaining open. The inevitable came when at the beginning of this week they closed up shop, saying they did not have enough people to serve the customers the way they deserved.

"When we started with the COVID-19 we knew that there was going to be a lot of issues because certain people couldn’t continue to work due to their families being compromised," said owner Jaclyn Childers. "So we did give our current employees a bonus, and we were trying to give raises and trying to encourage people to continue working."

The owners of a Monroe Papa John’s say every month since the pandemic began, it got harder and harder to justify remaining open. The inevitable came at the beginning of this week when it closed for good.

But ultimately their efforts were not enough. This Papa John’s in Monroe closed its doors for good Sunday - a note to customers cited the pandemic and a staffing shortage.

"Because of some of the other, I think, incentives maybe not to work at times, that drew a lot of our employees out and we weren’t able to fully this staff this store for over a year now," Childers.

Childers owned the pizza shop with her husband and parents. She says other businesses in the Monroe area are having trouble getting people to work and some have closed.

"For the last two months I've been looking for and trying to find people," said Lee. "And everyone is content with their unemployment they're content with the money they're being paid to stay home and not work."

"It’s easy to point at that and say that people getting an extra $600 a week is the problem," said Childers.

Matt Roling from the Mike Ilitch School of Business at Wayne State University gave his take.

"I think the issue that they’re facing now is that if you’re in the service industry, the minimum wage in the service industry is a couple of dollars an hour," Roling said. "And so if everyone knows the demand for eating out isn’t what it was a year ago, pre-covid, it’s going to be pretty hard to attract talented people to come work."

But many businesses, including Childers have offered sign-on bonuses to attract new workers.

"We did do a lot of paid advertising for jobs trying like on websites and on the news to try to get more people in but we were literally not getting any applications whatsoever," she said. 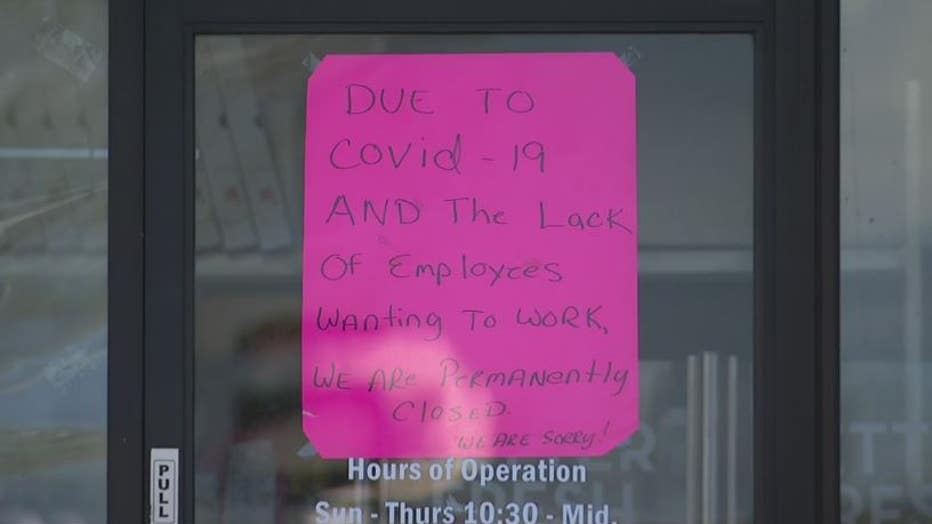 The fact Childers and her family have another Papa John’s location in Dundee softens the blow of closing this one, but it is still tough, they said.

"People I think, see this and think that the big guys at Papa John’s are the ones that are hurting, but it really isn't, it's us," Childers said. "And that’s how it is for a lot of other businesses in Monroe County," she said.

Republican state lawmakers are behind an effort to give unemployed people a thousand dollars if they find a job. That measure got through a state house committee , but is a ways away from being approved.