A brawl broke out following the game, leaving one of the captains of the opposing West Bloomfield team hurt -- two vertebrae in his back were fractured and his liver was lacerated. Police say 17-year-old Kenede Marion spent five days in the hospital. Two of them were spent in intensive care, where he was still being threatened on social media.

Kenede Marion transferred out of North Farmington High School because of a bully. When his basketball team from his new school returned for a game, he was jumped by the bully, his family said.

"Essentially they broke his back," said his mother, Kenya Marion. "He was in ICU and they were sending videos, tagging him, letting him know he got beat up. They sent videos the entire time he was in ICU."

Kenya says she transferred Kenede to West Bloomfield from North Farmington High School last year because of bullying -- assaults, threats and harassment. Kenede even has a PPO against a 17-year-old student at the school. Last week, Kenede heard from a friend that that student was after him again.

"The message was given - they're planning to fight you - either don't come to the game or I'm just letting you know," Kenya said.

Kenya says she and her family spent the entire game looking for the student who threatened Kenede, but didn't see him. But Kenede was jumped after the game as he walked to his car with a friend.

"All of a sudden just a mass amount of people started stomping - dragging him - grabbing his hair - bamming it on the ground and he began to fight," Kenya said.

The Farmington school district offers "healing thoughts" to Kenede and investigating what they call "a fight", saying appopriate discipline will be issued where warranted. The family is furious the student was allowed on school property given the PPO against him.

"I just can't even fathom why (the) administration has even allowed him to be at the game," his aunt, Aundrea Wardlaw, said. "I am totally appalled."

For Kenya, who has been a social worker in Farmington Public Schools for years, it's especially hurtful. She says neither the superintendent nor the principal at North Farmington has reached out to her.

"It wasn't a fight - it was an ambush - it was a planned ambush," Kenya said. "The mere fact that my son almost died on that sidewalk and not one administrator has called me..." 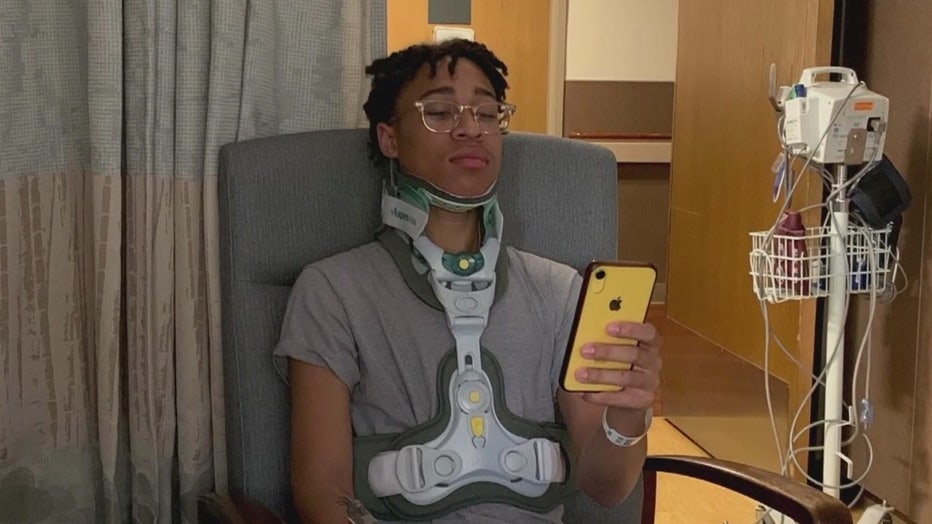 Kenede, a straight-A student, is out of the hospital in a neck brace, but ready to get back to school and back to the basketball court to support his teammates. His basketball career - his senior year is likely over, but his family isn't giving up on his dreams.

"Kenede is going to get through this and this is going to be probably two of the hardest months of his life but he's a warrior - he's strong - I saw him and it's a miracle," Kenya

Kenede is still hoping to play basketball when he goes to college next year. As for his family, they say they want justice.