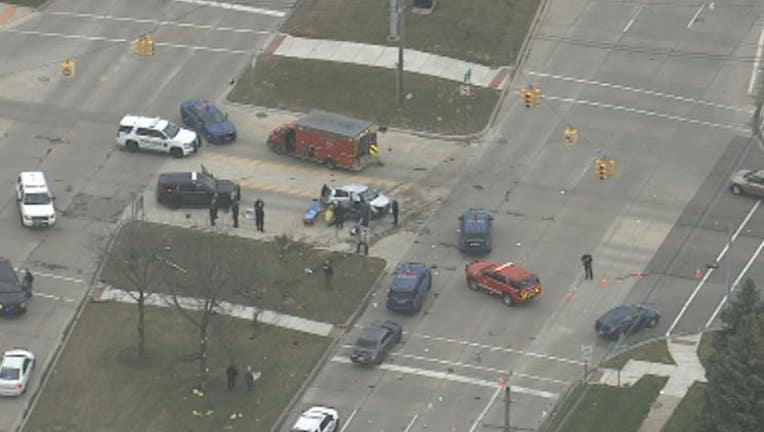 A police chase that started in Detroit ended in Sterling Heights after a driver who at times hit 115 MPH crashed into a tree in the median.

According to Eastpointe Police, they were called around 11 a.m. to a carjacking at Dollar General on Gratiot. The caller said two men pulled up in a Kia Soul and drove off in the Kia and the stolen car.

The car was found in Detroit near Gratiot and State Fair. The Kia was determined to have been stolen in Roseville on March 27th and believed to have been used in an armed robbery in Harper Woods earlier in the day on Tuesday.

When Detroit police approached the Kia, two men ran off but were quickly arrested. Two other men were still in the car and led police on a wild chase.

Detroit Police later backed off as Michigan State Police took over when the chase continued into Oakland County on Southfield Road.

The car eventually drove north on Woodward with dozens of law enforcement chasing it while going more than 100 MPH.

Police continued to chase the Kia as it double-backed into Royal Oak neighborhood.

At one point, he was on several dead-ends and appeared to be cornered in a cul-de-sac by three Michigan State Police vehicles when the driver went up through three yards to evade police.

A police chase that went through the suburbs of Oakland County Wednesday afternoon ended when the suspect lost control of the vehicle and spun into a tree, splitting the car in half.

An MSP SUV attempted a pit maneuver but the driver was able to speed off away from the trooper.

Around 3:30 p.m., MSP released a statement about their involvement in the chase. MSP said it was called to a reported armed carjacking suspect who was involved in incidents in Detroit and Eastpointe.

The car crashed in Sterling Heights at Metro Parkway and Dodge Park when it lost control and crashed into a tree.

MSP said after the car hit a tree, it rolled several times but both people inside received non-life-threatening injuries. Eastpointe Police further clarified that one person in the car had serious injuries while the other has minor injuries.

Charges are pending and police said evidence related to the crimes was found in the wreckage.

No officers were injured in the chase and crash.