FLINT, Mich. (FOX 2) - Vice President Mike Pence spent roughly 45 minutes speaking to a crowd of supporters in Flint Wednesday. Most of the speech focused on what President Donald Trump has already done why that should matter to Michigan voters.

Tonight as the sun went down, Air Force Two touched down at Flint Bishop Airport. Pence hustled up to the podium, highlighting the importance of Michigan in this election.

Vice President Mike Pence welcomed by crowd of 500 in Flint

Tonight as the sun went down, Air Force Two touched down at Flint Bishop Airport. Pence hustled up to the podium, highlighting the importance of Michigan in this election.

"The road to victory goes right through Michigan," Pence said.

With that in mind, he spoke of what President Trump has done for the economy in his first term. Specifically, for the state's biggest employer - the auto industry.

"GM announced they are adding 400 new jobs in Oakland County," he said. "Fiat Chrysler is already building a $1.6 billion new assembly plant that will create more than 6,000 jobs in Detroit. And maybe best of all, last year GM announced it's investing more than $150 million dollars in their assembly plant right here in Flint, Michigan."

He also touted the president's U.S., Mexico, and Canada trade deal which replaced NAFTA -  well received by this crowd.

"I'm not surprised that the lady wearing a UAW sweatshirt started cheering for the USMCA, it is a win and you know it," Pence said.

And as for the coronavirus pandemic, Pence projected optimism.

"Before the end of the year, we believe we will have tens of millions of doses of coronavirus vaccine in the world," he said.

But he painted a different picture when he envisions a Joe Biden-led America.

"In the midst of a global pandemic, Joe Biden wants to raise taxes by $4 trillion dollars," Pence said.

He left with a crowd urging them to vote, telling them he and the president have just cast their ballots. Pence in Indiana and Trump in Florida. 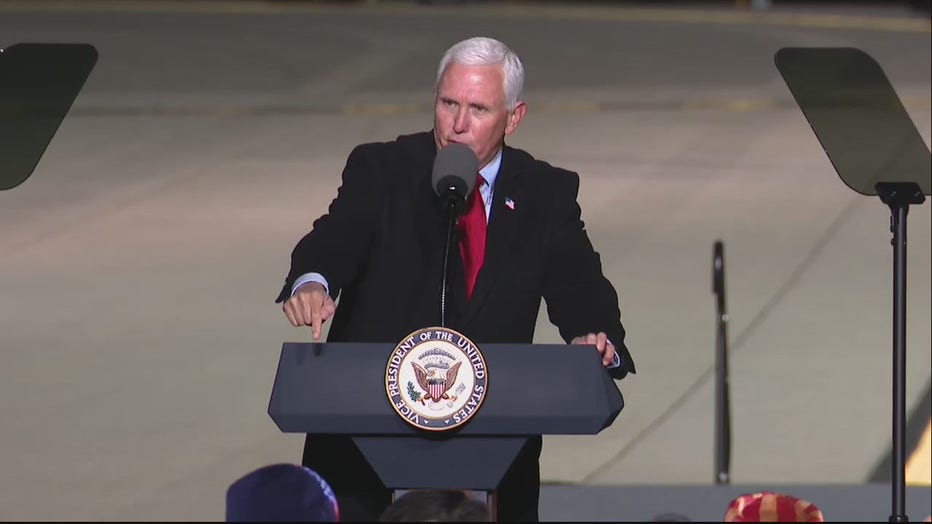 "I think the choice is whether America remains America," he said.

"Vice President Pence and this administration have turned their backs on the people of Michigan. As covid-19 cases surge across the state, the Trump administration has finally admitted what has long been obvious: They have simply given up trying to control the virus. Instead, this administration is busy trying to strip health coverage from people with pre-existing conditions. Michiganders deserve a leader who will never give up on them, Joe Biden will get the virus under control, create millions of good-paying jobs, and finally turn the page on this administration's failures."

Voters will decide in less than a week.