What is the Doomsday Clock?

The decision to move the hands of the clock is made by the Bulletin of the Atomic Scientists’ Science and Security Board in correspondence with the Bulletin’s board of sponsors, which consist of 13 Nobel Laureates.

LOS ANGELES - The Doomsday Clock remains at 100 seconds to midnight, the closest symbolic point to humanity’s destruction since the Cold War when the U.S. and Soviet Union tested their first thermonuclear weapons.

The time is unchanged from 2020, when the hands move the closest to midnight in the clock’s history.

The last time the Doomsday Clock was set this close to symbolic destruction was in 1957 when the U.S. and Soviet Union tested their first thermonuclear weapons and the clock was set to two minutes to midnight.

On Jan. 23, the Bulletin of Atomic Scientists announced the decision, saying the mishandling of the ongoing coronavirus pandemic is a "wake-up call" that "governments, institutions, and a misled public remain unprepared to handle the even greater threats posed by nuclear war and climate change."

The farthest from midnight the clock has ever been set was in 1991, with the end of the Cold War and the fall of the Soviet Union. The signing of the Strategic Arms Reduction Treaty, the first of its kind to cap both the U.S. and Soviet Union’s nuclear weapons arsenals saw the clock get set to 17 minutes to midnight.

What is the Doomsday Clock and who moves it?

The decision to move the hands of the clock is made by the Bulletin of the Atomic Scientists’ Science and Security Board in correspondence with the Bulletin’s board of sponsors, which consist of 13 Nobel Laureates.

The clock is set every year, and it is an indication of how close humanity is to annihilation from man-made threats.

According to the organization's website, the Bulletin gathers "a diverse array of the most informed and influential voices tracking man-made threats and bring their innovative thinking to a global audience."

The group was first founded in 1945 by Albert Einstein and scientists who developed the first atomic weapons that were used in the bombings of Hiroshima and Nagasaki. The Doomsday Clock was created in response to the bombings, as nuclear war soon became humanity's greatest threat. 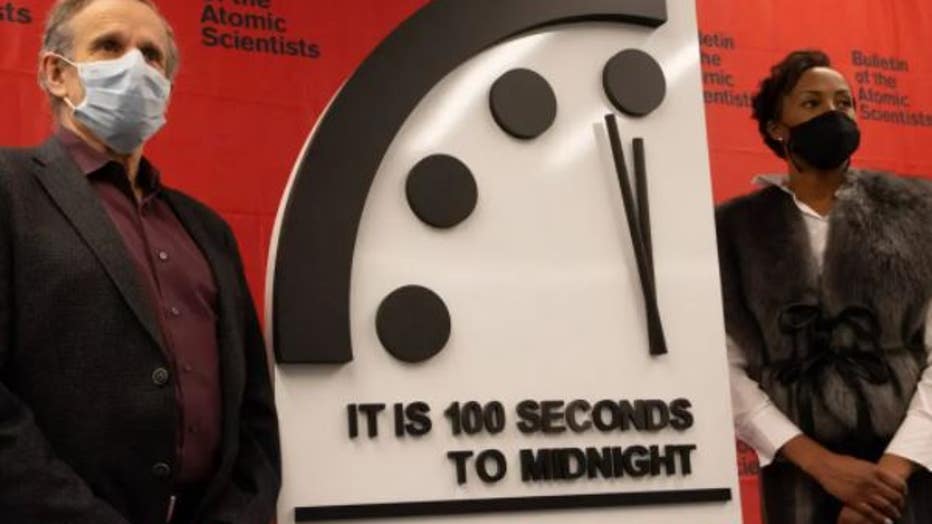 Members of the Bulletin of the Atomic Scientists' Science and Security Board, Robert Rosner and Suzet McKinney, reveal the 2021 setting of the Doomsday Clock: It is still 100 seconds to midnight.

The clock acts as a symbol, representing how close humanity is to destroying itself with its own technology.

"When the Doomsday Clock was created in 1947, the greatest danger to humanity came from nuclear weapons, in particular from the prospect that the United States and the Soviet Union were headed for a nuclear arms race," the Bulletin said on its website.

The possible civilization-ending disruptions from climate change were first recognized by the organization in 2007.

What factors went into this year’s announcement?

In a statement by the Bulletin addressed to "the leaders and citizens of the world," the organization said, "Humanity continues to suffer as the COVID-19 pandemic spreads around the world. In 2020 alone, this novel disease killed 1.7 million people and sickened at least 70 million more."

As to world governments’ responses to the global pandemic, the group of Nobel Laureates said the crisis has pointed out "how unprepared and unwilling countries and the international system are to handle global emergencies properly."

While the Bulletin said that COVID-19 in particular is not necessarily an existential threat to civilization, it illustrates that international organizations are ill-equipped to deal with the impending threats of nuclear weapons and climate change, which the Bulletin said pose the greatest threat to humanity.

"The hands of the Doomsday Clock remain at 100 seconds to midnight, as close to midnight as ever," said Dr. Rachel Bronson, president and CEO, Bulletin of the Atomic Scientists. "The lethal and fear-inspiring COVID-19 pandemic serves as a historic ‘wake-up call,’ a vivid illustration that national governments and international organizations are unprepared to manage the truly civilization-ending threats of nuclear weapons and climate change."

Astrophysicist Robert Rosner, who also sits on the Science and Security Board of the Bulletin of the Atomic Scientists, said, "The fact that the clock is now a mere 100 seconds from midnight signals really bad news. What we said last year is now a disturbing reality in that things are not getting better."

Rosner added that a particular concern is the undermining of the public's ability to discern what's true from what's false. "Past experience has taught us that even in the most dismal periods of the Cold War, we can come together. It is high time we do so again," Rosner said.

Sharon Squassoni, Georgetown University professor and member of the Science and Security Board of the Bulletin of Atomic Scientists, noted how extreme the nuclear weapons situation has become. She cited the recent collapse of the Iran nuclear deal, the reemergence of North Korea's nuclear capabilities, and the continued buildout of weapons by the U.S., Russia and China.

"In sum, the situation is extremely dangerous and demands an emergency response," Squassoni said.

FOX News contributed to this story.