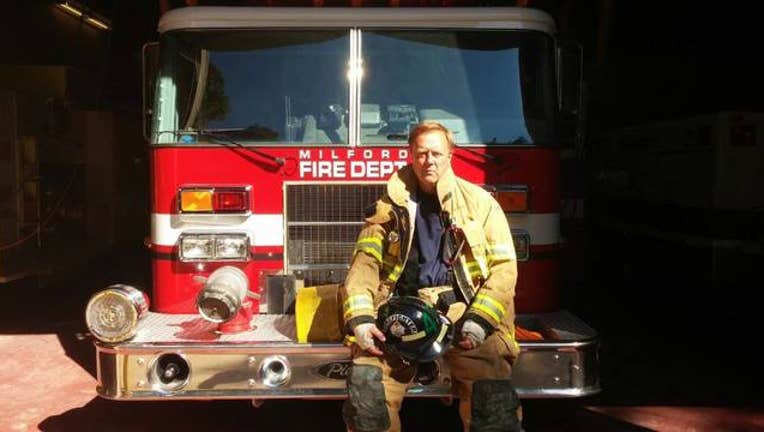 Thousands from the community will gather Thursday afternoon to remember Ron Savage, a FOX 2 anchor and a volunteer firefighter. Ron had a fatal heart attack over the weekend while training with the Milford Fire Department. He was 63 years old.

His funeral will be held Thursday, March 2, 2016 at 4 p.m. at St. Mary Our Lady of the Snows Catholic Church in Milford. At the request of Ron's family, FOX 2 will provide a livestream of the funeral.

You can watch the livestream on our Facebook page here, fox2detroit.com/live, or on our YouTube Channel here. Members of the community will also be gathering at Baker's Banquet Hall on Milford Road and at Milford High School to watch the livestream as the church is expected to be full.

Gov. Rick Snyder has ordered flags to be lowered to half-staff on Thursday.

An EMMY Award-winning journalist, Ron co-anchored Fox 2 News Weekends with Amy Lange. He produced Michigan's Most Wanted segments,  and police say more than 1,000 dangerous fugitives have been arrested from tips from FOX 2 viewers.

Aside from his hard work at the station, Ron served his community as a volunteer firefighter and EMT with the Milford Fire Department. He also previously served as a firefighter for the Brighton area.

He was a decorated firefighter who earned two citations for outstanding performance above and beyond the call of duty - one during a commercial factory fire and another for rescuing a critically injured driver from an overturned 18-wheeler.

Ron also volunteered with Crime Stoppers, The Humane Society, The Autism Society of Michigan, MADD and The American Lung Association.

A big camping enthusiast in both the upper and lower peninsula, his favorite hobby was cooking - specializing in BBQ smoked ribs, "low and slow" as he liked to say.

His favorite quote came from his late father, a WWII veteran: "You don't have to be perfect, just do your best."

Ron is survived by his wife and son.

Memorials may be made in his name to The Ronnie Savage College Education Fund, with checks payable to Ronnie Savage, c/o Lynch & Sons, 404 E. Liberty St., Milford, Michigan 48381.