It’s a harsh reality that’s all too real for thousands of Metro Detroiters - getting a shower and a change of clothes shouldn’t be a luxury.

FOX 2 - It’s a harsh reality that’s all too real for thousands of Metro Detroiters - getting a shower and a change of clothes shouldn’t be a luxury.

There’s a group that’s on a mission to change that and it is called the Wave Project. Husband and wife team Todd and Laura Gordon are partners in the effort, wanting to help people experiencing homeless get the dignity and the basics they deserve.

They started with mobile showers in a truck back in 2018. The mobile part is what makes this work.

"There are so many barriers for people experiencing homelessness or for people who need transportation, so for us, it’s really important to have our mobile shower service and essentials and help people to take it to areas of high need," said Todd Gordon.

This year alone, 1,000 people who are without a home, were able to shower. In August alone, they expected 100 people to use the showers, 300 people use them instead.

"We were just a group of friends, seven friends, from church, in the community, that felt the need to get out and try to make a difference," said Todd Gordon. "That has grown into people from that community and surrounding communities and all over Metro Detroit - and the country/world, jumping in together."

This new part of the project was born in June. And it came out of necessity.

"We would have our guests come and they would say, well, I’m gonna have to put these same dirty clothes on after I shower, I would rather not shower at all," said Laura Gordon. "So we were like wow, this is an even greater need than we expected."

The WAVE Project has expanded to include a van full of hygiene items and clothing for those in need after they use the mobile shower. 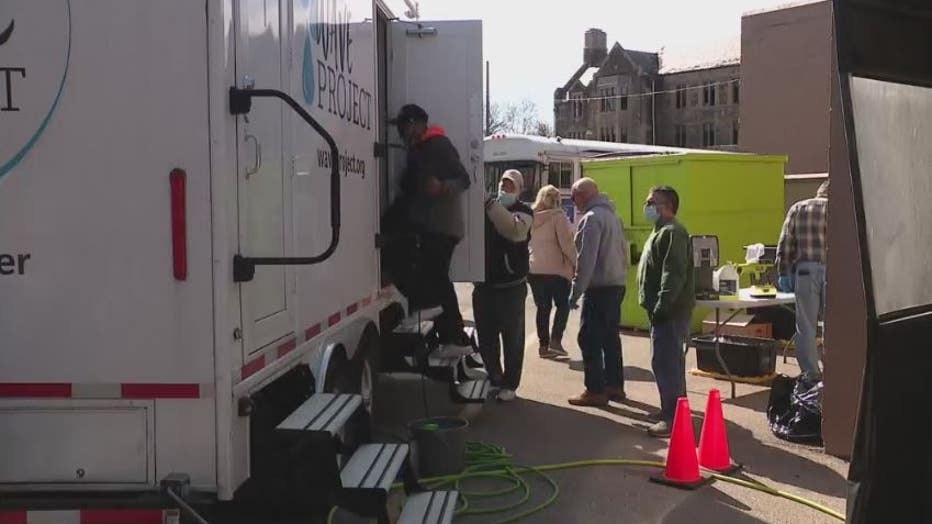 "We've got flip-flops, we have men's underwear and lots of T-shirts," she said. "Can't forget the ladies - we have bras and underwear for them as well. We have socks and a fan-favorite is backpacks. (Also) toothbrushes, lotion, shampoo.

"And back here we have pants, hoodies, long-sleeve shirts, and it is all right here and we can take it directly to the need.

"People just come, get what they need and go take their shower. They come out in a fresh pair of clothes.

And a fresh look at the world around them. A surge of optimism often comes with the shower, the Gordons said.

The team works 12 months out of the year. They hope people will see this and come join them in the team effort.

"We don’t want to do a one-off, we want to be there a week after week, month after month, so the person in need knows that on Tuesday as well at 12 PM, we’re going to be there for them and try to help them out," he said.

"It’s not just Todd and I come out there are so many people working together to make this possible," Laura said.

On Sept. 19 there is a golf outing if you would like to help. To learn more, to become a volunteer, or to make a donation, go to waveproject.org