LAKE ORION, Mich. - It's game day for the Wayne State University Football team, and number 42 kicker Luke Bevilacqua. While some try to be a hero on the field, Luke is a hero off the field.

How far would you go to save a stranger's life? Luke didn't think twice about his sacrifice for a stranger.

It is very rare when someone becomes a match for donating bone marrow. Which is why when a Wayne State student athlete got the call he was one after joining the Be The Match registry, he couldn't pass it up.

A while ago, the young college student from Lake Orion enrolled in the Be the Match program, which pairs donors with patients who need bone marrow transplants.

"For me, I just did it because everyone else was doing it, and then like I said I didn't think much of it. My stuff got sent in and I didn't hear anything for a few months," he says.

Luke was a busy student-athlete at WSU when he suddenly got a call he'll never forget about a woman he's never met.

"They want you to know that you are someone who can save someone's life and there's sometimes not another option."

Luke was told a 61-year-old woman in Texas needed his bone marrow to survive.

"It's actually very hard to find somebody who's a perfect match," Dr. Robertson Davenport tells us. Saving lives with bone marrow is his life's work as the Director of Transplant Medicine at the University of Michigan.

There, bone marrow is treated like liquid gold and is carefully stored in a freezer. It comes from a pocket of precious liquid found in our bones, and it's filled with stem cells.

"When we're doing a bone marrow transplant what we're trying to transplant is this very small number of stem cells that are going to reconstitute all the blood in the recipient," Dr. Davenport explains.

Finding a match is a complex comparison of tissues or markers linked to your immune system. It doesn't happen often, so Luke decided he had to do everything he could to save the stranger's life.

"When it all came down to it, I guess it was a little bit of unknown and discomfort for me but the option to save someone's life, so it was nothing I could pass up." So in May 2019, Luke gave the ultimate gift. His bone marrow.

"So what that involves is actually going into the operating room, going under general anesthesia and then we take two pretty big needles and stick them into the hip bones in the back and then put in syringes and pull up from there," Dr. Davenport explains.

Those cells were immediately flown to Texas and transplanted into the woman. Many details were not shared, but we do know that Luke saved her life. 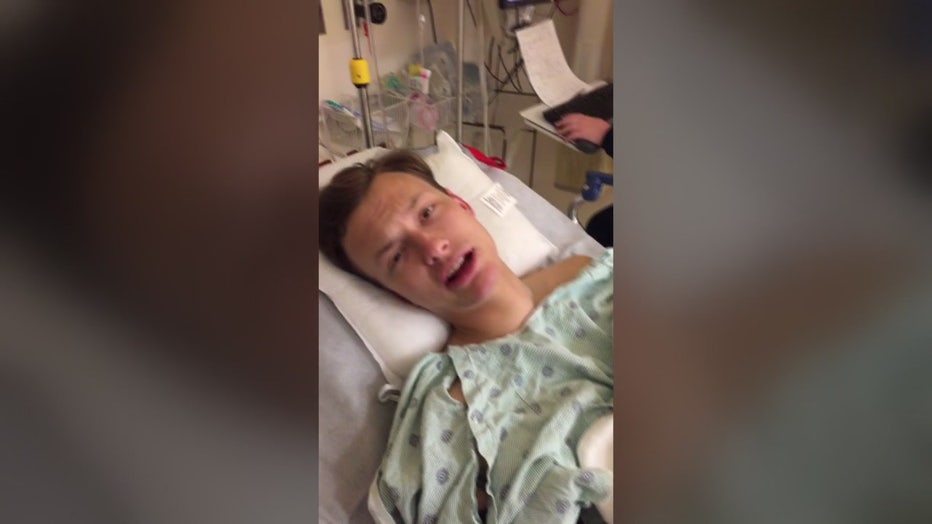 Luke says the sacrifice was well worth it and that he'd do it again if he ever got the call again. Luke has been honored by the Allstate American Football Coaches Associaton Good Works Team.

"They're the heroes. There's plenty of people who can do my job, there is nobody else in the world who could've done what Luke did that day," Dr. Davenport says. "He saved a life. You can do it too."

To learn more about joining the marrow registry, visit www.bethematch.org.