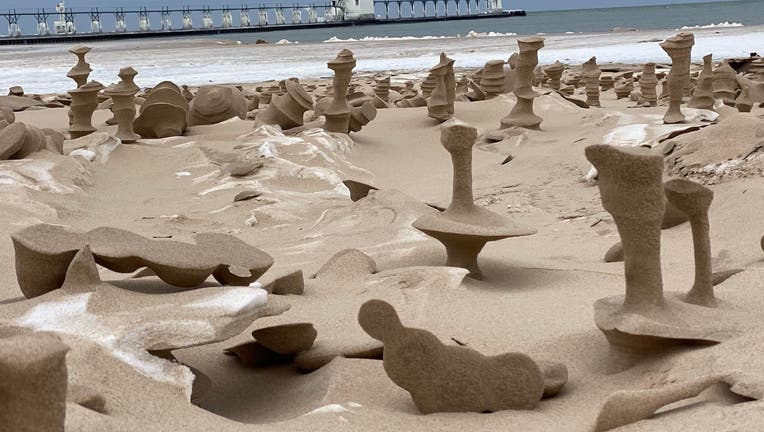 ST. JOSEPH, Mich. - At first glance they look like the objects from an alien planet. Maybe Mars? Except there's an active beach in the background and Mars doesn't have one of those.

But where on Earth would someone find dozens of petrified totems of sand? Maybe in a museum. But these unorthodox pillars were photographed on a beach. Two lighthouses stand out in the background.

As it turns out, one of the places to find them is along Lake Michigan.

An unsuspecting traveler could be forgiven for not knowing what they were. Even some geology experts from Michigan aren't sure.

"I have never seen these before," said John Yellich, Director of the Michigan Geological Survey after looking at the image. "It almost looks like a Photoshop."

But he knows it's real by the two lighthouses in the background - which is in Southwest Michigan.

Terri Abbott can attest the image certainly isn't Photoshopped. After all, she took the picture.

"It was like a different planet," she said. "I've never seen anything like them and I spend a lot of time there!"

‘There’ is Tescornia Park, which hugs the west Michigan shoreline near St. Joseph. Google describes it as a "scenic, quiet lakeshore park with a sandy beach, pier with a lighthouse & a picnic pavilion." It makes no mention of bizarre columns that one would sooner find in a Dr. Seuss novel than in Southwest Michigan.

What would someone even call them?

"I know some people around here call them Hoodoos. Sand hoodoos," said Jeff Rechner, the superintendent of parks at St. Joseph. "I guess we had a good showing of them this year."

Rechner recalls they usually show up each year. A lot of them appeared in 2015. He says they usually form in windy, cold environments. Parts of the sand freezes, then howling wind blows through and creates shapes.

That's Joshua Nowicki's assessment as well. The photographer has an eye for some of west Michigan's prettiest pictures. And while he's captured photos of these sand hoodoos before, he says the sculptures this year were the biggest he's ever seen.

"(They) are some of the tallest ones that I have ever photographed - the largest being about 15 inches tall," he said.

In his experience, they don't last very long after forming - only a couple of days before the wind knocks them down or if the temperature goes up, and they collapse. Sometimes they get covered in snow.

MORE: Does Lake Huron hold the secret to Earth's oxygen?

The factors Nowicki described would make sense. West Michigan was battered with cold temperatures and brutal winds in early January, creating ripe conditions for the phenomenon to occur. According to Alan Arbogast, the chair of the Geography Department at Michigan State University who also studies the state's dunes, he speculates a combination of cold temperatures, strong winds, and frozen sand all play a role.

However, they don't remind him of hoodoos - the tall, thin rock formations people might find in Utah. Instead, he thinks they look like ventifacts.

"They're rocks that have been sandblasted," he said, pointing to the smoothness of the sand sculptures in Abbott's photo. Ventifacts often look grooved or polished after being heavily eroded by strong winds.

"What happened I'm pretty sure - and I'm speculating here - I imagine what happened is that the sand is frozen. Then we had a big storm roll through a couple weeks ago with strong winds. The wind blew along the beach and blasted out the areas that were a little less frozen.

"Those things aren't being built up," Arbogast said. "Everything around the features that are standing up was eroded from it. Those are the things that are left behind."

While certain conditions are likely necessary for creating the sculptures, they aren't unique to Lake Michigan. Arbogast said they likely form elsewhere like in the northern Pacific Coast in the U.S. or in Northern Europe.

"I'd say no matter where they're occurring, it's unusual. Whether or not it's here or there or any place."