The push coincided with Senate Republicans' release of a $2.2 billion coronavirus relief plan, which is less than half of what the Democratic governor proposed spending on one three weeks ago.

"We may fall on the priority list of supplies and as a result see a slowdown in our vaccination rate," Whitmer said during a news conference. "This is a very real threat."

Six weeks after Congress and then-President Donald Trump enacted the most recent round of funding, the GOP-led Legislature and governor have not agreed to disburse the aid, which would go toward things such as vaccine distribution and virus testing, K-12 schools, businesses, emergency rental assistance. 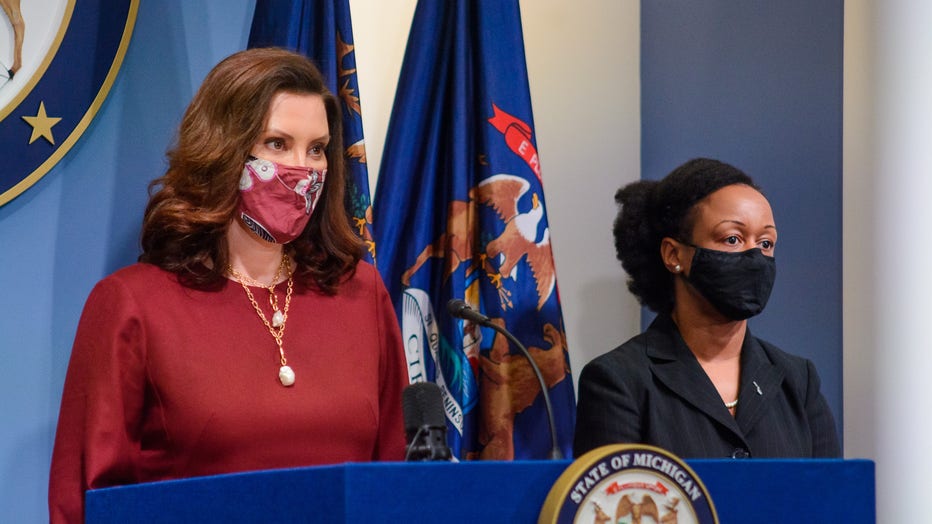 Asked how many vaccines Michigan could lose if it ran into funding problems, Whitmer said "it's hard to put a specific number on it."

"Instead of issuing a blank check for the governor to use without a detailed plan, our plan funds our state's most pressing needs and saves additional resources so we can continue to assess the situation and have the ability to respond to problems as they arise," said Senate Appropriations Committee Chairman Jim Stamas, a Midland Republican.

Whitmer countered that "meting it out in tranches ... is foolish because it undermines our ability to keep Michigan at the top of the list for the supply chain as we are addressing COVID needs."

The Senate legislation, unlike the House bills, would not tie school funding to the governor agreeing to cede the state health department's authority to prohibit in-person instruction or sports to local health officials. It would, however, cut nearly $10.4 million in spending to eliminate roughly 62 jobs at the Michigan Occupational Safety and Health Administration and the Liquor Control Commission. Both agencies have fined businesses for violating COVID-19 regulations.

Under the Senate plan, $500 million in state funding would be used to offset businesses' property tax payments and licensing and inspection fees and to boost the unemployment trust fund. Whitmer in late December vetoed legislators' attempt to deposit tax dollars into the fund, which is supported by unemployment taxes assessed on businesses.

The governor, who reiterated her call for schools to offer in-person instruction by March 1 at the latest, said both federal and state funds would help with that goal and with addressing pandemic-related learning loss.

"Any plan that fails to allocate the full amount of funding intended for Michigan's schools would only hurt our students and leave them further behind their peers in other states," said Robert McCann, executive director of the K-12 Alliance of Michigan, which includes districts in Wayne, Oakland, Macomb, Genesee and St. Clair counties.

Under the House plan, schools that provide face-to-face learning by Feb. 15 -- and for the rest of the academic year -- would get more funding than those that remain virtual-only.

"In-person learning can happen safely, which is why it's a primary focus of our budget," said House Speaker Jason Wentworth of Farwell.