In the heart of downtown Detroit during the holiday season, FOX 2 sat down with Governor Gretchen Whitmer and Lt. Gov. Garlin Gilchrist about their next four years in office- with jobs, the economy, and education of high interest to Michiganders

DETROIT (FOX 2) - In the heart of downtown Detroit during the holiday season, FOX 2 sat down with Governor Gretchen Whitmer and Lt. Gov. Garlin Gilchrist about their next four years in office - with jobs, the economy, and education of high interest to Michiganders

FOX 2: "What's the one bill you want to see come across your desk - that first bill that you want to sign in the new term?"

Gov. Gretchen Whitmer: "Well, let me say this first and all: I am so excited about a second term. We are all focused on helping people get ahead.

"I would anticipate very early on, having some action that will put more money in people's pockets - whether that's repealing the retirement tax or the working family tax credit. These are things that I think we can take quick action on, that will really give people a little breathing room and a little help when they need it most."

FOX 2: "How can you reassure the folks that both parties can work together? Is it a possibility in Lansing with everything going on and the discourse where it is now?"

Whitmer: "Not only is it a possibility, it's an imperative. So for the last four years, we worked with a Republican-controlled legislature and it was downright contentious at times, no question - but we got a lot of good stuff done."

Lt. Gov. Gilchrist: "I anticipate that we'll continue to be responsive. You know, with this narrow majority it presents a big opportunity nonetheless. And, we're going to get there through collaboration so I suspect the majority leader and minority leader will have a good relationship and work together."

And as state leaders prepare to hash out deals on the state budget and education spending, people are still wondering about those pesky, crumbling roads, the governor pledged to fix four years ago.

FOX 2: "You've talked about years of disinvestment that has taken place but over four years, alot of people are wondering - shouldn't the road repairs be further along?"

Whitmer: "Well, we're addressing decades of disinvestment. In four years with a legislature that wouldn't work with me, we've gotten a lot done and I'm excited about that. We went forward with a bond because the legislature said we're going to have a plan - and they never did a darn thing. I'm not going to wait for people who are going to fold their arms and not solve problems.

"So we moved forward with a bond and started to get a lot of great projects done, no matter where you go, you see the orange barrels. We now have the federal resources coming in but those are not in perpetuity. This is one-time funding and that's why it's still important that we work with the legislature and have a long-term solution."

Of course this future talk begs the question of even more - with national media tossing around the governor's name as a possible presidential contender.

FOX 2: "You've said you are not running for president but what do you make of the national discussion and would you welcome the vetting process?"

Whitmer: "No, I just got elected to four more years and (have) the job that I love, that I want to do. And this is going to have 100 percent of my focus. I am so grateful to be the governor of this state. I've lived here my whole life. I'm going to live here for the rest of my life, and I want to make sure that whoever succeeds me, has an even stronger Michigan to continue to take to the next level.

"So, I'm excited about this second term and it's 100 percent of my focus."

FOX 2: "But if the National Democratic Party, if they push for your name to be thrown in the ring, would you accept that?"

Whitmer: "No, I'm going to be the governor of Michigan the next four years."

There's also questions about it, the governor made it clear. Lt. Gov. Gilchrist also addressed rumors that at one point he may run for Detroit mayor. He says no, he is focused on being Lt. Governor and calls it the opportunity of a lifetime. 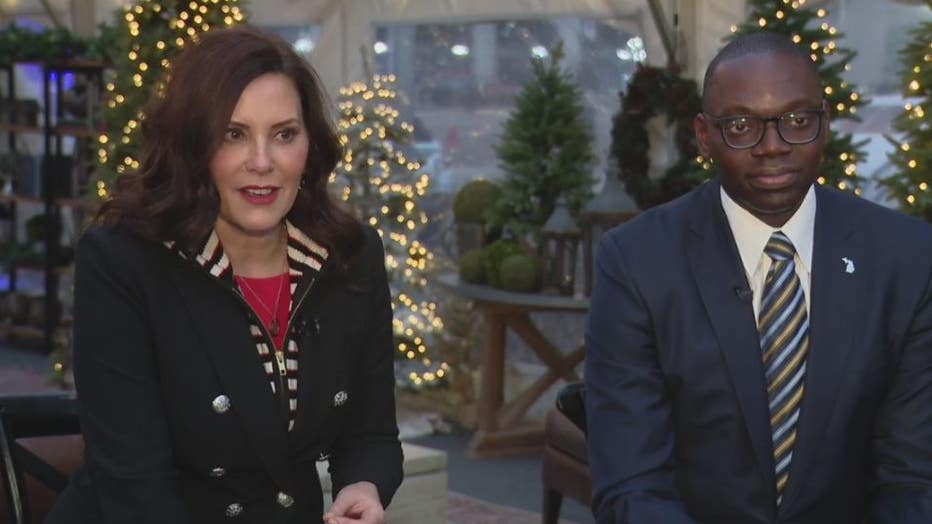