MOSCOW - Smoke from wildfires burning in Russia has reached the North Pole for the first time in recorded history, NASA officials said.

Russian crews have been battling more than 100 active fires burning across 3.4 million acres of northeast Siberia. On Friday, authorities expanded a state of emergency in the region of Sakha-Yakutia in an effort to bring in outside resources to help combat the flames.

A satellite image shared on Aug. 6 by NASA shows just how far the smoke has traveled. The agency said it has stretched some 2,000 miles from east to west and 2,500 miles from south to north — including an area never reached before.

"This week, wildfire smoke has travelled more than 3,000 km (1,864 mi) from Yakutia to reach the North Pole, a feat that appears to be a first in recorded history," NASA wrote in a post.

The agency also said smoke from the Russian wildfires last week stretched more than 1,200 miles to parts of Mongolia, including the capital city of Ulan Bator. Some northern and central provinces of the country have been covered in "white smoke," the Chinese news agency Xinhua reported. 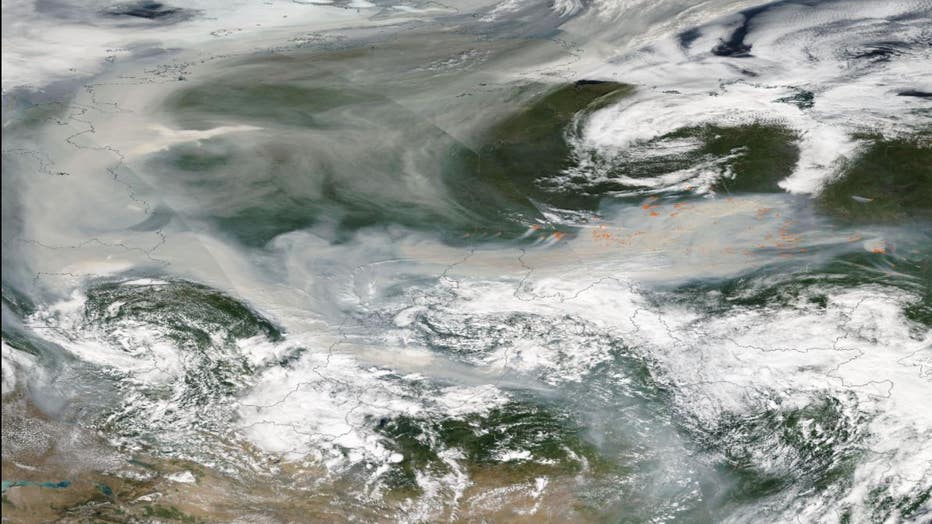 The northern part of the Sakha Republic has recorded some of the coldest temperatures on Earth but this winter has set record high temperatures for the region, the agency said in the post. It’s the largest republic in Russia and is heavily covered by boreal, or snow, forests.

In recent years, Russia has recorded high temperatures that many scientists regard as a result of climate change. The hot weather coupled with the neglect of fire safety rules has caused a growing number of fires.

The United Nations on Monday released a report calling climate change clearly human-caused and "unequivocal." It said the planet’s climate is getting so hot that temperatures in about a decade will probably blow past a level of warming that world leaders have sought to prevent, with the U.N. referring to the findings as a "code red for humanity."

"It’s just guaranteed that it’s going to get worse," said report co-author Linda Mearns, a senior climate scientist at the U.S. National Center for Atmospheric Research. "I don’t see any area that is safe ... Nowhere to run, nowhere to hide."