Rob Wolchek investigates a place where their pot products are unchecked, unregulated, and maybe even, unsafe.

DETROIT (FOX 2) - Meet the Chronic Clown, the Beard and the Boss. They're running a bootleg marijuana business anyone can access online, selling and delivering weed to anyone, anywhere.

And while you'd never know it, this operation is strictly off the books.

"There is no such thing as a stand-alone, legal, licensed state delivery service in Michigan. You have to be tied to a legal dispensary," said Jerry Millen, who owns the Greenhouse of Walled Lake.

Their pot products are unchecked, unregulated, and maybe even unsafe.

"It did fail for pesticides," said Ben Rosman. "(It failed) for bifenthrin, which is an insecticide. and then myclobutanil and paclobutrazol which are both fungicides."

On the polar opposite side of things, Ubaked is top quality marijuana seller.

Rob Wolchek: "You can only sell your product to licensed facilities?"

Wolchek: "In the state of Michigan?"

This is the headquarters of Ubaked, a state-licensed marijuana grower and edibles producer. Bob Dodge is a big-time businessman overseeing an operation that has cloning rooms, grow rooms with plants in all stages of development.

"On this, you've got our license number, a bar code, we have a scan gun which we were issued by the state, this scan registers this plant into the state system," he said.

The plants are carefully tended to by botanists and horticulturists.

Even the irrigation is controlled down to the drop.

"When a room calls for feeding, the nutrients are sent into that first tank with the RO water that mixes it, then sends it out to the tank or whatever rooms it's going out to, and this is programmed to feed," Dodge said.

And the product is top-notch. This state insures that. This Michigan regulator takes random samples of each product from the buds to the bars - candy bars, that is. Ubaked has a full-time candy shop and bakery in house as well.

Contrast that, with the pot from this other place. Their name is "Exclusive Delivery Services" on their website.

But they also go by "Cargo 420," or any of these other names that they say will show up on your credit card, if you order from them.

Rob Wolchek had a few undercover buyers do just that. 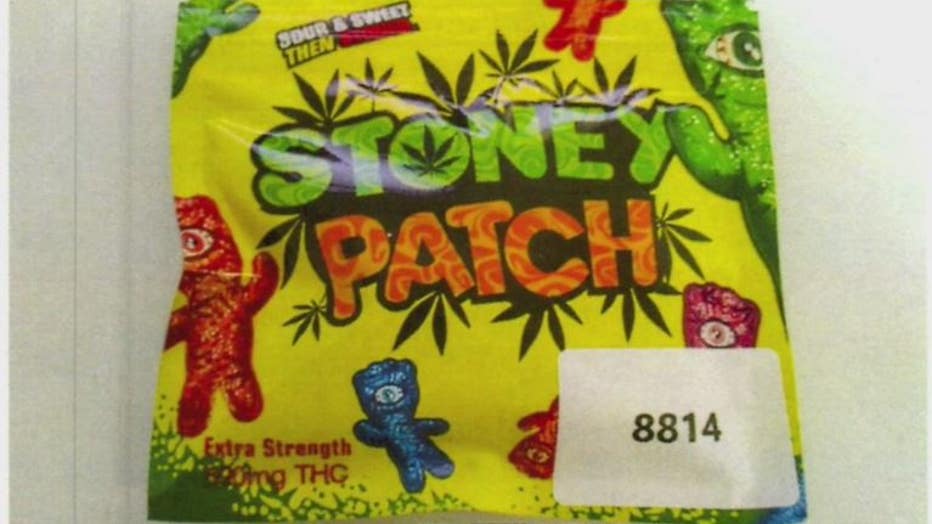 One of the Cargo 420 products that did not hold up under lab scrutiny.

"If you're within three miles you've got to spend a minimum of $35," said the undercover buyer looking at the website.

Wolchek: "Three miles from where?"

At first, we didn't even know where this place was located. It's nowhere on their webpage.

Wolchek watched the driver deliver the dope - or should we say "medical marijuana" - even though none of our buyers ever had to show their medical marijuana cards, or IDs, or anything.

Sometimes our buyers didn't even use their real addresses. One guy had it delivered to a house on the next street over in some random guy's driveway.

We got some interesting products: "Nerd Ropes," "Moonrocks" "Mini Oreos" "Stoney Patch" kids' candy. All of which Wolchek took immediately to a lab for testing.

But before he gives you the results, let's look at how marijuana delivery is supposed to be done the legal way.

The delivery driver can only deliver to the address on your state ID. Today Brady the driver is delivering to a customer named Shawn who agreed to allow us to videotape him. 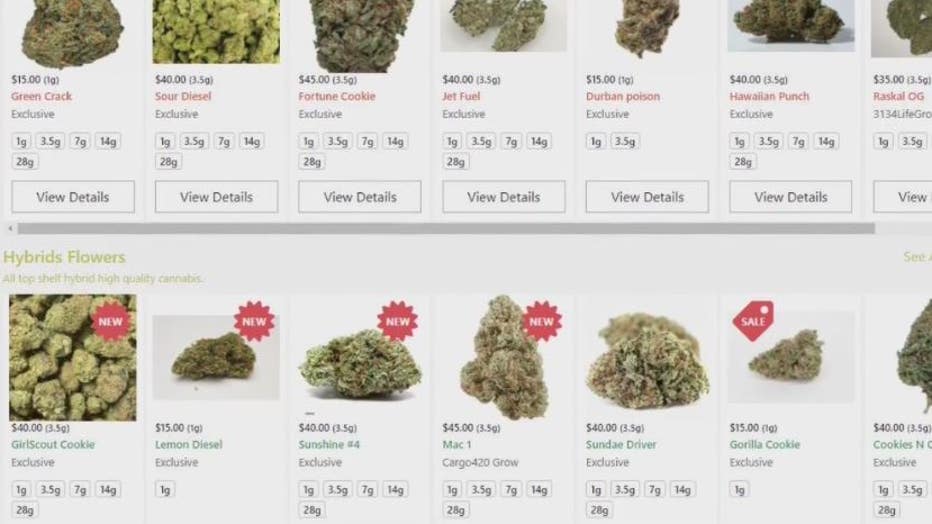 Products listed on the Exclusive Delivery Services site., one of the names for Cargo 420.

"We got the delivery here, Josh has got it all ready," said Brady, who works at Sticky Ypsi. "We're talking about the manifest, our secured bag here, we've got the total for Shawn here of $107.66. So what I'll do now, is I'll bring it to my bag, I'll put it in there, I'll lock it up, and we're ready to go on our delivery.

"I got the bag on me, it's locked and I'm going to put it in my trunk to make sure it's extra secure, and then we'll go on the ride."

The pot must be secured in a lockbox and in a locked compartment of the vehicle. Brady's route is tracked turn-by-turn by the state.

"Hello Shawn this is Brady from Sticky Ypsi, I have your delivery for you," he says over the phone after arriving.

Brady gets to the door and asks "Can I see your medical card and ID please?"

The buyer has to sign a state manifest saying he received delivery. Brady unlocks the box and the delivery is done at the doorstep.

That's a far cry from how Cargo 420 delivers. No ID, and drivers don't even get out of their cars. A customer comes up, pays, and gets a bag of weed.

After weeks of tailing their drivers, Wolchek found the headquarters here on Brooklyn Street in Detroit's Corktown area.

Cargo 420 has several drivers who come in and out all day and night. Many of them drive cars registered to a guy named Willie Espy.

Who's Willie Espy? He's the registered agent for Cargo 420 - and for several of the other businesses with names listed on the ordering website.

Here he is in front of the business and with his 2020 Corvette. Nice ride - not a nice guy.

According to the Michigan State Police, Espy has been convicted of felony drug dealing - cocaine, heroine and other narcotics. He also has a couple of felony gun convictions, plus embezzlement on the side.

This is the only time we saw this guy. But we saw all the same workers during the two months we watched the place. And they were always delivering.

"The black market is running rampant. It's 100 times bigger than the legal market," said Jerry Millen.

Jake Abraham is the owner of Sticky Ypsi.

"We are in a business that is state-regulated like cigarettes and alcohol," Abraham said. "Well if I bought two cases of cigarettes and started selling them on a website and delivering it to people's homes, I would probably be arrested within three days."

These guys told Rob they pay more than $100,000 per month to the state - tax revenue they are happy to contribute. But they think bootleg sellers are making a mockery of the system.

"All you do is pick up the phone, make an order," Millen said. "You can get gummies, vape pens, marijuana flour, candy bars. All (of it) black market, all untested and it's unsafe."

Wolchek takes the cannabis products from Cargo 420 AKA Exclusive Delivery Services, to PSI Labs in Ann Arbor.  Ben Rosman is the co-owner.

"Anything sold at a licensed, legal, regulated provisioning center or dispensary, would first have to be tested at a lab like ours," said Ben.

We didn't tell the lab where we got the products, but they knew immediately this stuff was not from a licensed provider.

The lab didn't know on the website these "Moonrocks" are advertised as containing around 50 percent THC.

But Houston, we have a problem. The Moonrocks had just 18 percent THC. And that wasn't all.

In fact it tested positively for two banned fungicides. Let's just say this ganja is garbage.

"They kind of look like dog turds and they're also full of poison," said scientist Lev Spivak-Birndorf.

Next, Gorilla Glue flower is advertised to be 25 to 28 percent THC.

The study found the pot has a banned pesticide otherwise known as bug spray on it, and two fungicides including Miclobutionol.

Cyanide? Talk about a buzzkill.

Wolchek also brought in some edibles - StoneyPatch Kids made to look like SourPatch Kids.

Rob is surprised there isn't a big label on it that says it isn't candy.

Then there's a 400 mg Nerds Rope - which by the way 400 mg would be a huge dose - which is not even allowed in this state. And neither is the packaging.

"This is something the state would say appeals to minors," Ben said.

It looks like it was made for kids. Michigan Marijuana Regulatory Executive Director Andrew Brisbo said, "We need to remain vigilant in protecting children."

Maybe the way Cargo 420 is protecting kids is by making sure this isn't as strong as advertised.

The Nerds Rope claims to be 400 mg of THC, but the lab says it contains only 8 mg.

"It is sort of advertised to be this really potent stuff," said Birndorf. "And it turns out ..." 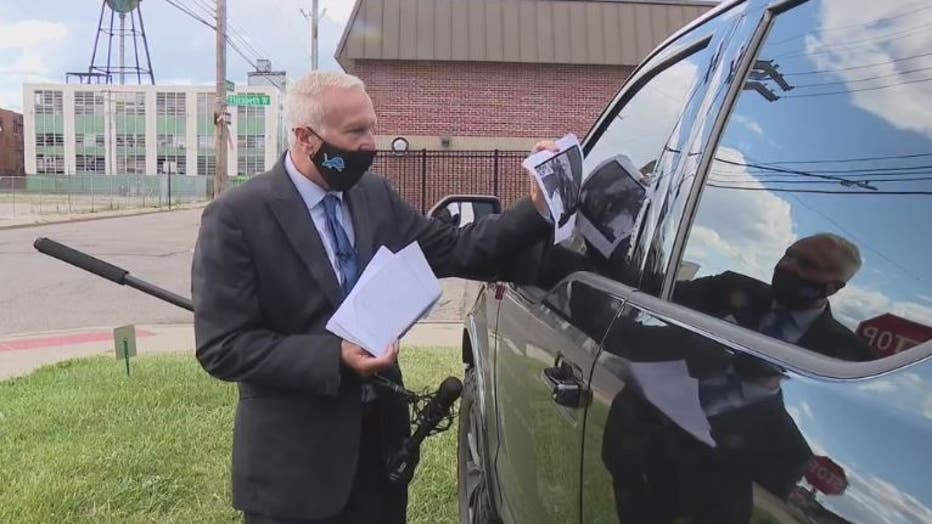 Rob Wolchek asks questions of the Beard about Cargo 420.

Everything we tested was way off, packaged unethically or covered in bad chemicals.

It was time for Rob to take his findings to the headquarters of this bootleg blunt business.

Oh look, there's "The Beard" in his truck.

Wolchek: "Hey are you John?"

Rob tries to get him to talk showing a picture of the Beard with the Boss.

Wolchek: "I know you know him because here's a picture of you and him."

A second man walks out of the business to intervene.

Wolchek: "Are you the manager of this place?"

Wolchek: "Well who runs this place? Who's your boss?"

Even though he's wearing a Cargo 420 shirt, he acts dumb.

Wolchek: "So you guys deliver weed?"

"You all putting cameras and microphones in people's faces." 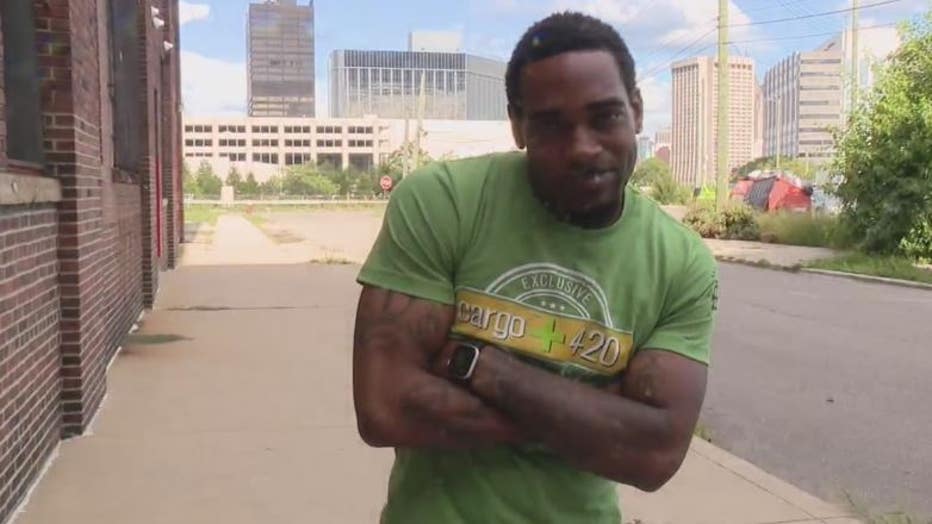 "The Clown" poses for Wolchek outside the Cargo 420 HQ.

Wolchek: "Well you came out to me."

"Yeah I'm just trying to find out what's going on."

There's cameras all over the business so when Wolchek goes to the door he is not surprised that nobody answers.

They do answer inside when he calls.

"Hi there it's Rob Wolchek from FOX 2. I am standing outside your building, can somebody come out and talk to me?

After about an hour, the Beard guy realizes Rob is not leaving.

Wolchek: "You guys don't have a license to do that do you?"

"Talk to my lawyer."

"Give me your card and I'll hand it to my lawyer."

Wolchek: "No I'm not done. I want to talk to somebody that's in charge. Are you in charge?"

"I just said talk to my lawyer."

And this guy walks up and goes from a clown to a guy with a frown. 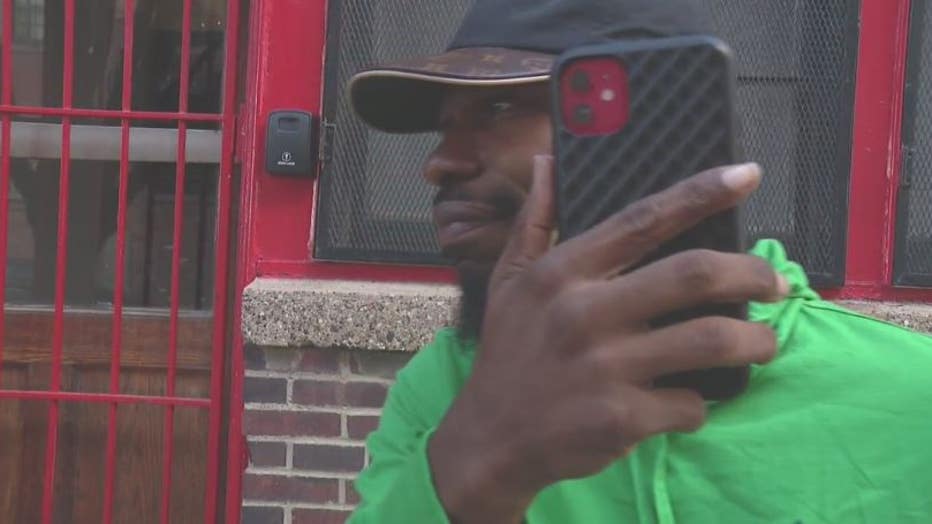 The Beard tells Wolchek to talk to his lawyer outside Cargo 420.