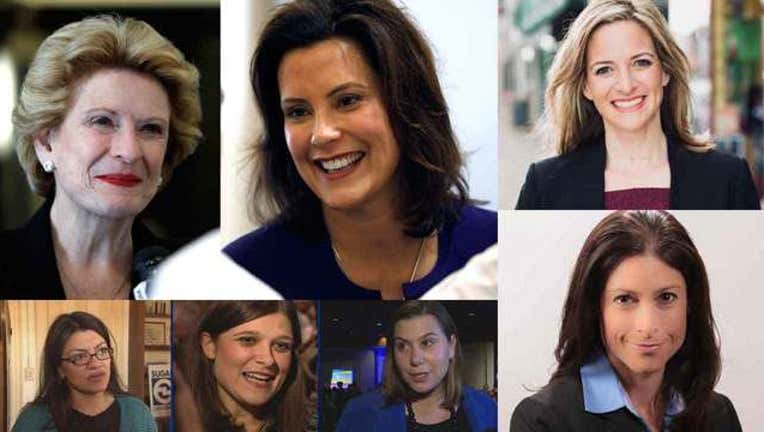 Jocelyn Benson became the first Democrat to win the secretary of state's office in 28 years. Dana Nessel was narrowly ahead in her bid to become the first Democrat elected Michigan attorney general in 20 years. U.S. House candidate Haley Stevens won an open GOP-held seat and Elissa Slotkin declared victory over a Republican incumbent, though the Associated Press had not called that race as of early Wednesday. And female candidates helped Democrats cut into, but not break, GOP majorities in the Statehouse as voters backed ballot initiatives to legalize marijuana for recreational use , take aim at partisan gerrymandering and expand voting options.

"At a time where we see too many people who want to divide us through building walls, I think we in Michigan need to get back to building bridges," Whitmer, a former legislative leader, told supporters in Detroit. The people, she said, chose "hope and inclusion" along with "respect and collaboration" over divisive politics.

The findings were among preliminary results from AP VoteCast , an innovative nationwide survey of about 138,000 voters and nonvoters -- including 3,943 voters and 649 nonvoters in the state of Michigan -- conducted for The Associated Press by NORC at the University of Chicago.

Whitmer's victory further cemented a trend in Michigan gubernatorial races. The last time the state consecutively elected governors from the same party was the 1960s, and the party opposite the president has now won 10 of the last 11 elections.

Whitmer, of East Lansing, was a state lawmaker for 14 years -- always in the minority -- and later served as Ingham County's interim prosecutor. As the top Democrat in the Senate, she spoke forcefully against GOP-backed laws that slashed business taxes while raising them on individuals, made union fees optional, and required residents or businesses wanting health insurance coverage for elective abortions to buy extra coverage. She disclosed during a debate on the abortion bill that she had been raped in college.

"I like the idea of having a woman governor. I think it's important for girls to see women in leadership positions," said Kristin Schrader, a 51-year-old marketing and communications officer for a Girl Scouts organization who voted for Whitmer and lives in Superior Township near Ann Arbor. "If there were a better male candidate, of course I'd vote for him. So it's not the overriding factor, but it helps."

Others who voted for Whitmer cited her pledge to press for a multibillion-dollar plan to improve Michigan's deteriorating roads.

Schuette -- a former congressman, state senator, state Cabinet official and state appellate judge from Midland -- had warned against going "backward" and likened Whitmer to Democratic former Gov. Jennifer Granholm, who was in charge during Michigan's economic downturn and pushed through a mix of tax hikes and spending cuts to resolve major budget deficits.

People who voted for Schuette said they favored his opposition to tax increases, his pro-business record and his work as attorney general, specifically how he investigated Flint's water crisis and the Larry Nassar sexual abuse scandal at Michigan State University.

Nearly six in 10 Michigan voters said their feelings about Trump influenced their ballot choices. Nearly four in 10 said a reason for their vote was to show opposition to the president, while about two in 10 said they wanted to send a message of support.