Let's start with the Wolverines. They had won their last 5 games against Rutgers by an average of 51-7. This one didn't go that way.  It took triple overtime before UM Could separate themselves. Based on what we've seen this year it's not hard to take that as an indication of the current direction of these two programs.

Early problems on offense set a bad tone. Michigan was moving the ball well on their opening possession and Cornelius Johnson coughed it up after a catch in Rutgers territory. First lost fumble of the year. End of drive.

Second possession. For the second straight week, Michigan was stuffed on a 4th and one. For the second straight week, they had Joe Milton working out of the shotgun in short yardage. Why? Joe Milton is 6'5", 240 pounds. Put him behind the center and go. Straight ahead. Tom Brady is one of the best ever at the play. Call him and get a zoom tutorial.

The sight of Cam McGrone going off on a cart was just so 2020. Above and beyond not playing well, this team has lost its best players (multiple) on each line to injuries and now their top linebacker. Throw in Brad Hawkins leaving and this was another chapter in the nightmare.  I'm not blaming injuries for how this team has played but their run of bad luck has been off the charts.  Yes, a good Michigan team still handles Rutgers easily.  No, this isn't a good Michigan team.

Joe Milton just isn’t a good quarterback right now. Potential? Sure. Cade McNamara has potential too. And he is the reason they won this game.

Speaking of - McNamara was slinging it. He Had to continuously fight from behind with little room for error and he did it. Then, when they got the lead and had a chance to extend, he led the way. Again, he’s the guy and it’s not close. His next competition should be with JJ McCarthy.

Michigan’s defense wasn’t good. But credit them for their shutdown inning. When UM took the lead early in the fourth, they got a stop. Josh Ross with a big sack and the Wolverines got the ball back.

HOWEVER. Let’s not kid ourselves. This defense is still bad. And they would prove it again late in this game.

Ok. This was a win and that is never a bad thing even if it felt like nothing more than avoiding the unthinkable. A loss of course would have felt far worse and made us all question the direction of the program. Truth is, we’re doing that anyway, so just win and keep trying to improve.

Ok.  To the Lions. I've seen some things from the booth. This one was about as lifeless and disappointing as you'll find. On a day when this team had a chance to get back to .500 and to do so against a struggling team without its quarterback and its top running back. 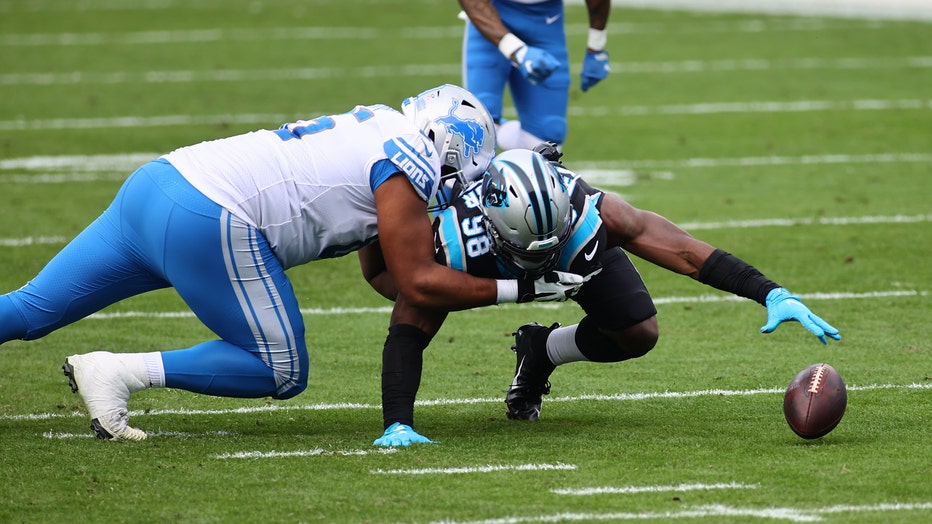 Carolina Panthers defensive end Marquis Haynes reaches for the fumble during the 1st half of the Carolina Panthers versus the Detroit Lions on November 22, 2020, at Bank of America Stadium in Charlotte, NC (Photo by Jaylynn Nash/Icon Sportswire via G

Let's throw some random thoughts out there.

The Lions didn't gain 100 yards in either half. I understand they were missing some big pieces on offense but that doesn't explain what happened.

The Lions' deepest penetration was to the Carolina 25 yard line. From there, they promptly got sacked and lost 8 yards. They never got into the red zone.

Matthew Stafford had never been shut out as the quarterback here in Detroit. That streak, if anybody was counting, is over. The Panthers also had 11 quarterback hits to go with those sacks.

Defensively they seemed to catch a break when Teddy Bridgewater couldn't play and Carolina had to turn to former XFL star (are there any other kind?) PJ Walker. Walker threw two of the worst redzone interceptions you will ever see by a professional quarterback. HOWEVER, he also completed 24 of 34 for 258 yards and a touchdown. The Lions had one quarterback hit.

You can pick this one apart from top to bottom. There was nothing this team did to define itself. I know they care. I know these guys work hard. I don't know how that didn't manifest itself into something more competitive than this.

They may not be a good team but this was levels beneath that. They have 4 days to get ready for Houston. If you can't stop PJ Walker, it's about to get a whole lot tougher against Deshaun Watson.

As for the elephant in the room? This will ramp up the talk about Matt Patricia and Bob Quinn and their futures - it comes with the gig. You sign up for it when you sign on. You want to change the conversation? Win. This was as far from that as you can get.

And with that. Big smiles everyone!! I will see you on Thanksgiving.