DETROIT (FOX 2) - It was a Lions game that felt very familiar.  The defense struggled to get a stop. Tennessee scored the first three times they had the ball: 12 play drive. 1 play drive. 8 play drive.

21 points with just under 10 minutes to go in the first half.  Lions down two scores.

And once again they found themselves playing from behind. Trying to find some way to cobble together enough points and defensive efficiency to win. You’ve heard all that stuff. Let’s try something else.

The Titans had won 9 games before they took the field on Sunday. They went to the AFC Championship game last year. They’re pretty good.

But here’s the thing. Their defense isn’t good:

For the here-and-now, they’re kind of like the Lions in that regard. Those problems sound familiar but they’ve figured out a way to deal with it. Sure, they have a running back that’s looking more and more like a generational talent. However, I am not of the belief that it takes a guy playing like a Hall of Famer to do what they are doing.

What they are doing, in addition to making up for a bad defense, is lifting a quarterback who was considered a bust when he was shipped out of Miami. Remember, he wasn’t even the starter when last year began. He was playing behind Marcus Mariota.

Tannehill was the 2019 NFL Comeback Player of The Year. He has 53 touchdowns and 11 interceptions over the past two years.

He’s enjoyed postseason success with wins over New England and Baltimore before losing to Kansas City, coming up just short of the Super Bowl.

Does anybody believe that Ryan Tannehill is better than Matthew Stafford? (I certainly don’t but I won’t spend a lot of time here). 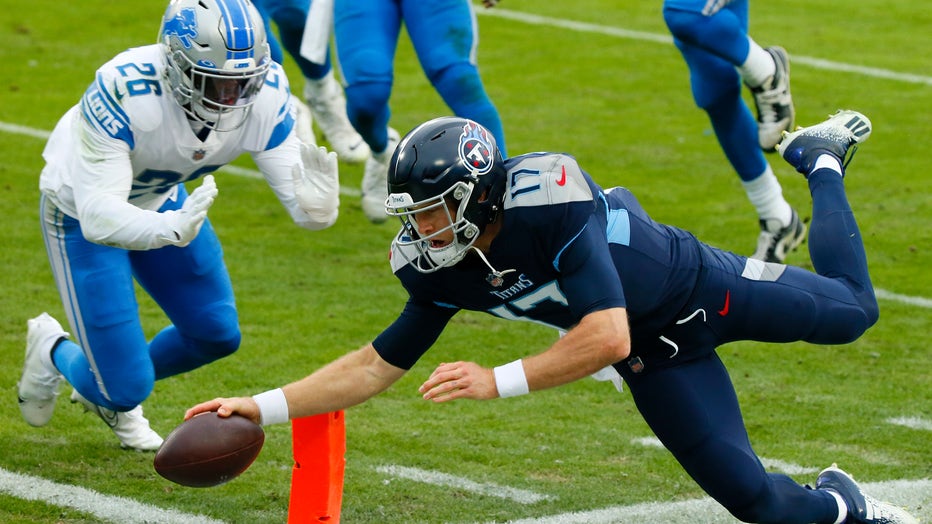 Quarterback Ryan Tannehill #17 of the Tennessee Titans dives into the end zone for a touchdown over strong safety Duron Harmon #26 of the Detroit Lions during the second quarter of the game at Nissan Stadium on December 20, 2020 in Nashville, Tenness

What’s clear is that Tennessee is a better team than Detroit. They’ve solved the riddle that has tormented the Lions since Barry Sanders left. They can run the ball. Even with all their defensive deficiencies, they can win.

And use this as the template for what we hope Detroit becomes going forward. (As an aside, as we said on the show Sunday night, this is what the Lions were supposed to be going backward. Back to when Matt Patricia was hired, a grind-it-out team that exhibits mental toughness for 60 minutes, one that runs the ball, one that limits mistakes and finds a way to win in the 4th quarter.)

The Lions don’t have that identity. They don’t have one phase of their game that carries them through tough times - one thing they can truly count on. And, we have learned, that Matthew Stafford's passing will not always save the day.

When you are that one dimensional, this league shuts you down. Tennessee has a strong running game and a complementary passing game. That works. Half the equation doesn’t.

Lacking an identity and a strength to lean on, the Lions don’t win most games that are there for the taking in the 4th quarter. The Titans lean on what works, Henry and play-action passing and they do win.

That’s also why the Lions don’t have a Head Coach or a General Manager. They weren’t able to put those things in place. They didn’t win.

So, that moves us forward to the search that is ongoing.  Another regime bringing their ideas on what it will take to turn this franchise around.

Perhaps, the new GM and Head Coach need look no further than Sunday's tape to see both a cautionary tale and a way forward.