"You don't see a guy change his delivery during a season and have success, but he's done it," Blue Jays manager Charlie Montoyo said. "Give him credit for making the adjustment — he was great out there today."

Bo Bichette and Kevin Smith homered for Toronto, which won 3-2 on Saturday and lost 2-1 on Friday. 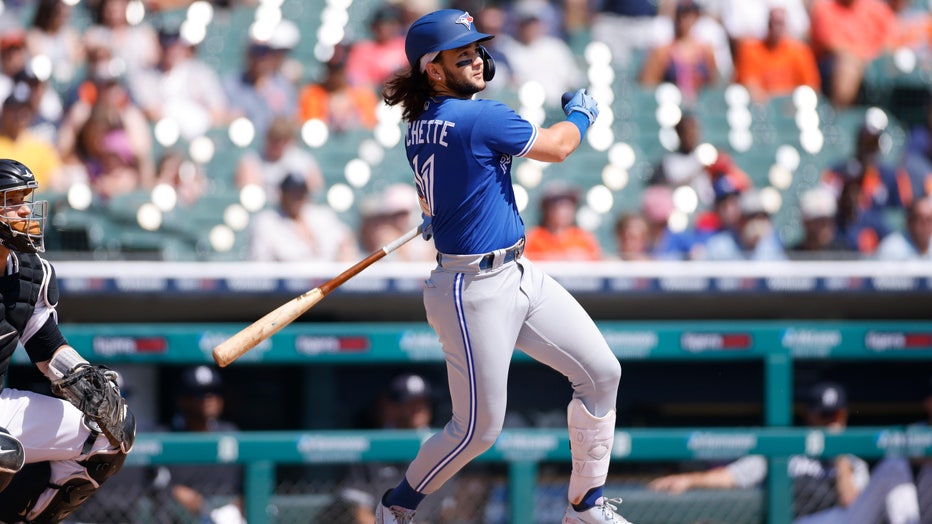 DETROIT, MI - AUGUST 29: Toronto Blue Jays shortstop Bo Bichette (11) looks up after hitting a solo home run to right field in the first inning of an MLB game against the Detroit Tigers on August 29, 2021 at Comerica Park in Detroit, Michigan. (Photo

"We're winning games with pitching and defense right now, which is great," Montoyo said. "We know our offense is going to get going — we're sure of that."

Berríos (9-7) allowed one unearned run on six hits in seven innings. He struck out 11 without walking a batter.

"They were really aggressive against me during my last start, so I had to make some changes today," Berrios said. "I wanted to find a way to make that work against them."

Tim Mayza got the final four outs for his first career save.

"There were definitely some positives to take out of this start," Boyd said. "I missed the two pitches on the home runs and that ended up being the difference in the game, but it was good to be back out on a big league mound again."

Bichette hit Boyd's ninth pitch of the game into the right-field stands. Smith made it 2-0 in the fourth with his first career homer.

Smith was happy the ball got past Tigers center fielder Derek Hill, who stole a homer from him on Friday.

"I just wanted to make sure he wasn't going to do it again — he got one from me in Toronto and here the other night," he said. "Luckily, this one had a few extra feet."

An error and a double off first baseman Vladimir Guerrero Jr.'s glove gave the Tigers runners on first and second with none out in the sixth. Miguel Cabrera grounded back to Berrios, who caught Robbie Grossman between second and third for the first out.

Jeimer Candelario struck out, but Harold Castro made it 2-1 with a single to right.

Toronto loaded the bases with no outs in the seventh, but Teoscar Hernández flied out to shallow right and Alejandro Kirk grounded into a double play that included Harold Castro catching Willi Castro's flip barehanded as he stepped on second and threw to first.

"It was obviously huge to get out of that inning without allowing a run," Tigers manager A.J. Hinch said. "We had our infielders positioned perfectly, but Harold and Willi still had to make that play."

The Tigers optioned OF Daz Cameron to Triple-A Toledo to open a roster spot for Boyd.

The game was delayed by rain for 26 minutes before the Tigers batted in the fifth. When a heavy shower began, the umpires had the tarp put on the field, only to see the rain stop almost immediately. Berrios said he wasn't sure how to handle the situation.

"It was so hot out there that I didn't have to worry about keeping my arm warm," he said. "I just wanted to do some throwing without getting too tired, which was tough because we didn't know what was going to happen."